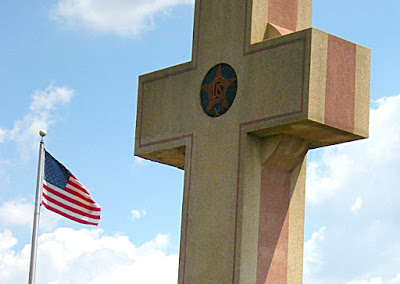 The Bladensburg World War I Veterans Memorial was saved on Monday when the United States District Court for the District of Maryland ruled that it is constitutional, despite being in the shape of a cross. According to First Liberty Institute attorneys, this victory will be a game-changer in the battle for veterans memorials everywhere.

“This victory sets an important precedent,” says Kelly Shackelford, President and CEO of First Liberty Institute. “It not only affirms the Bladensburg Memorial will remain in its place of honor but helps ensure that all the nation’s veterans memorials, and the veterans they honor, will be protected.”

The 90-year-old Veterans Memorial came under attack nearly two years ago in February 2014, when the American Humanist Association sued for its removal or destruction, claiming that its cross shape violated the Establishment Clause of the First Amendment.  First Liberty Institute and its volunteer attorney team at the Washington, D.C., office of global law firm Jones Day intervened in the lawsuit on behalf of The American Legion to defend the memorial.

Built by a local post of The American Legion in 1925, the Memorial’s purpose was to honor the 49 men of Prince George’s County, Maryland who died serving in WWI.

According to an article by Richard Wilson published in Prince George’s Magazine in 1983, the Memorial Committee formed to raise money for the Memorial included ten mothers who had lost sons in the war. In 1920, Mrs. Martin Redman, the mother of the first sailor from the county to lose his life in World War I, became the treasurer for the committee. In a letter to Senator John Walter Smith, who had donated money for the cause, Mrs. Redman wrote:

By 1922 efforts to build the Memorial had faltered and a local post of The American Legion took charge of the effort, erecting the Memorial in 1925. It bears the names of 49 fallen servicemen from Prince George’s County, other commemorative words and dates, and a quote from President Woodrow Wilson:

The seal of The American Legion is prominently emblazoned on the two primary faces of the monument at the intersection of the cross arms, and the only other words inscribed on the memorial are “VALOR; ENDURANCE; COURAGE; DEVOTION” with one on each of the four sides of the monument.

Today, the Memorial sits in a public area amidst several other memorials commemorating other conflicts in American history and honoring those who served in them.

THE CONSTITUTIONALITY OF CROSS-SHAPED MEMORIALS

As part of their lawsuit challenging the historic Memorial, the American Humanist Association filed a motion for summary judgment in May 2015, asking the Court to order that the government remove the memorial from the property, completely demolish the memorial, or remove the “arms” of the memorial to make it a “non-religious slab or obelisk.”

The Court’s opinion on Monday reflected that these arguments were heard and agreed with.

“[Monday’s] ruling granted our motion and found the Memorial well within the bounds of the First Amendment,” Roger Byron, Senior Counsel for First Liberty Institute said.

[T]he Monument “evokes far more than religion. It evokes thousands of small crosses in foreign fields marking the graves of Americans who fell in battles, battles whose tragedies are compounded if the fallen are forgotten.” Buono, 559 U.S. at 721 (plurality opinion). The evocation of foreign graves is particularly relevant here because, unlike crosses challenged in other cases, the Monument explicitly memorializes forty-nine servicemen who died in Europe during World War I…

Another case cited by the Court on Monday was Van Orden v. Perry, a 2004 U.S. Supreme Court victory which found that the Ten Commandments monument displayed outside the Texas state Capitol was constitutional. First Liberty Institute was part of that case, as well, serving alongside the attorney general of Texas.

Using the train of logic established by the Van Ordendecision, the Court wrote of the Bladensburg Memorial:

The Monument was constructed and financed by the American Legion and a private group of citizens whose purpose was to remember and honor Prince George’s County’s fallen soldiers. See Van Orden, 545 U.S. at 701 (Breyer, J., concurring) (noting the secular purpose of the display’s founders). The American Legion’s seal is “displayed on the [Monument], prominently acknowledg[ing] that the [American Legion] donated the display, a factor which, though not sufficient, thereby further distances” the Commission from any potential religious aspect of the Monument… Much like the Ten Commandments display in Van Orden, the location of the Monument “does not readily lend itself to meditation or any other religious activity.” Van Orden, 545 U.S. at 702 (Breyer, J., concurring).

THE POWER OF PRECEDENT

First Liberty Institute attorneys believe that the Bladensburg victory will be added to the list of cases like Salazar v. Buono and Van Orden v. Perry, strengthening the defense of veterans memorials that may come under attack in the future.

“The decision protects not only this historic memorial, it also helps ensure that all the nation’s veterans memorials will be protected,” Byron said.

Some, like the Christian Post, which interviewed Byron on Tuesday, are wondering if an appeal of the decision from the American Humanist Association is likely.

“An appeal is always possible,” Byron responded, “though the plaintiff humanist group and its members would have an uphill battle. After a thorough analysis of the facts and the law the Court made clear that the Memorial is completely lawful. The Court’s decision is a total victory for the Memorial, the Legion, and the State of Maryland.”