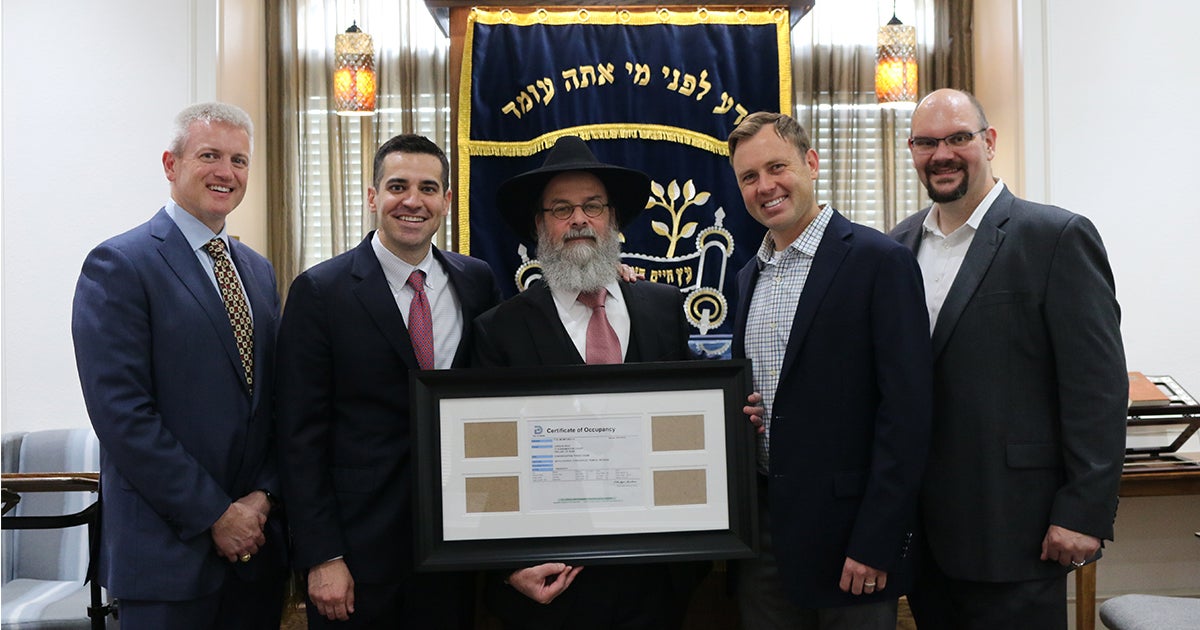 Today, you and thousands of First Liberty supporters can join our friends in the Jewish community by saying, “Mazel Tov!”

After an arduous legal battle that lasted nearly six years, and one that involved two lawsuits, we’re happy to share the good news that First Liberty and the city reached a settlement agreement. Moving forward, the members of CTC and its families will be allowed to meet and worship in a private, North Dallas home, as well as to continue serving the needs of its surrounding community.

This victory not only brings an end to a very long legal case, but it also sends a positive signal that Dallas is a diverse city that welcomes CTC and other minority faith groups.

Many of you stood strong with us throughout the course of this case, both financially as well as with your prayers and encouragement, and that’s why all of us at First Liberty want to say thank you for your steadfast support.

It’s triumphs like this that will have a profound and lasting impact for everyone’s religious freedom — and we couldn’t have done it without you.

And of course, this victory is also due in large part to the excellent advocacy of our network attorneys from Winston & Strawn LLP, as well as the dedicated efforts of former First Liberty attorneys Justin Butterfield and Chelsey Youman.

So, as we celebrate that CTC’s members can continue living out their faith and worshiping in peace, let’s build on the momentum of this important win because there are still more battles to fight, and more battles to be won for the right of Americans to worship in their own homes.

We offer the best representation to our clients, free of charge. Would you consider giving to First Liberty Institute to help us fight back against the opponents of religious freedom who are attacking your constitutional rights? Give today.

Across America, religious groups and individual citizens regularly face opposition, preventing them from using their own land or their own homes to exercise their religious beliefs.

In a case very similar to that of CTC, First Liberty is fighting to stop one of the worst cases of religious discrimination we’ve ever encountered. In Airmont, NY, located just outside New York City, village officials have practically forced the local Orthodox Jewish community to practice their faith in hiding.

For more than 30 years, local officials have made it all but impossible for anyone who is an Orthodox Jewish believer to live out their faith, demanding that they receive approval from the city to worship in their very own homes. This means that the city has authority to come into their house to measure how much space in their own home they can or cannot use for religious purposes. They’ve even threatened a Rabbi with jail for hosting worship in his home.

But the threats to religious liberty aren’t just happening to Orthodox Jewish synagogues or other minority faith congregations.

Today, these types of attacks are taking place in senior living communities where our parents or grandparents live. In two recent First Liberty cases, Ken Hauge of Virginia and Donna Dunbar of Florida are being harassed and intimidated simply for hosting Bible studies in their own apartment buildings.

Ken, who is in his 80’s, was even threatened with eviction just because he wants to live out his faith. And Donna, who is in her 60’s, was outright forbidden from hosting any kind of religious gathering.

But in light of our recent victory for CTC, as well as the momentum from a historic year of victories for our first freedom, we want to leave you with a note of encouragement:

As Americans, we don’t need permission or approval from state officials to live out our faith in our own homes. We already have all the approval we need to worship, and it’s found in the First Amendment of the U.S. Constitution.

That’s why First Liberty is First in the Fight for you and for all Americans, because in our country our homes are the most sacred and protected space where we should be free to live out our faith.

Surely, of all places, your own living room should be a safe space to practice your faith—to pray, to discuss, and to fellowship. Join the national effort asking U.S. H.U.D Secretary Ben Carson to stop attacks on religious freedom in our homes. Join the fight.