Is the National Motto Constitutional? 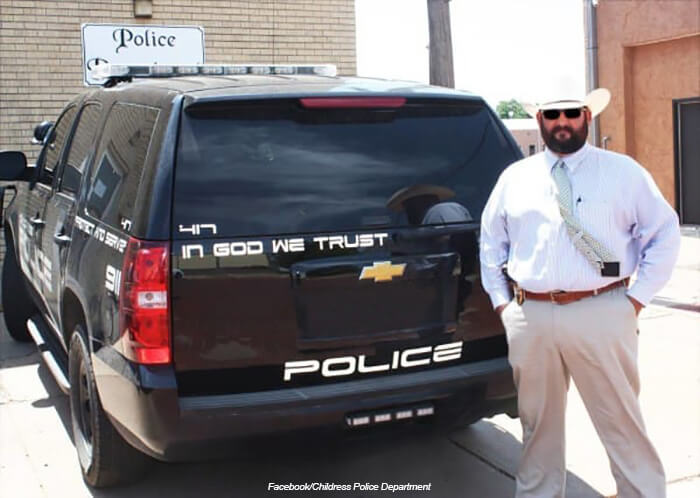 The national motto, “In God We Trust,” is under attack on multiple fronts. But First Liberty is prepped and ready for battle, fighting to defend the motto and its use by representing Police Chief Adrian Garcia, Texas, and his desire to display the motto on his department’s vehicles. First Liberty also filed an amicus (friend-of-the-court) brief in federal court in Ohio to defend the use of the motto on U.S. currency.

WHERE DID THE MOTTO COME FROM?

The motto “In God We Trust” has been a part of America’s history for many years. It was first seen in Francis Scott Key’s Star Spangled Banner, as “In God is our Trust.” As many know, his song went on to become the national anthem, and in 1864 the phrase “In God We Trust” was printed onto the national currency for the first time.

The Civil War was one of the most tragic and profound events in American history. This crisis not only threatened the very existence of the country, but spread tragedy and loss to every community of the North and South as fathers, sons, and brothers died by the hundreds of thousands, and the economic infrastructure of great swaths of the nation was ruined.

Facing such a staggering national trial, historical records show that Americans – from our nation’s leaders to everyday Americans at home – turned to religious faith in massive numbers. As a result, many appeals were made to the Secretary of the Treasury, requesting recognition of God on national currency.

On November 20 1861, Treasury Secretary Salmon P. Chase agreed to the request saying, “no nation can be strong except in the strength of God, or safe except in His defense.”

Since 1864, “In God We Trust” has appeared on U.S. Currency. The phrase was adopted as the national motto in 1956, and has been repeatedly upheld as such, despite opposition.

“IN GOD WE TRUST” IS CONSTITUTIONAL

The placement of “In God We Trust” on federal buildings, coinage, on law enforcement vehicles, and in the pledge of allegiance, has come into question repeatedly in the past. However, each attack has been met with the same answer.

Eleven of thirteen United States Courts of Appeals have unanimously held that the motto is constitutional, and does not violate the establishment clause, no matter what form it has taken.

The phrase “In God We Trust” has not only been engraved on our currency, in both the House and Senate Chambers, in many federal buildings and on the Washington Monument, but also, in the hearts and minds of many Americans. It is a vital piece of our national history, one that should not be limited merely because it mentions God.

“The idea that it’s illegal for police or sheriffs to have the national motto on their car is ridiculous,” states Kelly Shackelford, President and CEO of First Liberty Institute, “The America these complainers are attempting to create would be a nation hostile to religion and its religious heritage. It would be a nation that strips any mention of God from the public square. That might have worked in the U.S.S.R., but it does not work in the United States of America.”

THE MOTTO IS USED MORE OFTEN THAN WE REALIZE

The motto was not created to force religion upon others, nor was it created to offend those who don’t believe in God. The motto is based in the beliefs of the Founders and what they hoped this country would stand for in the future. The Founders themselves sealed the Declaration of Independence with a request for the “protection of divine Providence.”

Every president from George Washington to Barack Obama has ended his inaugural oath with the phrase, “so help me God.” A number of inaugural addresses, Thanksgiving Day proclamations, and even President Eisenhower’s D-Day speech have included public acknowledgment of God. And since 1827, the courts have opened with the declaration, “God save the United States and this honorable Court.”

In Wallace v. Jaffree (1985), Chief Justice Burger wrote in his dissent that he found it ironic the argument before the Court was over prayer during a moment of silence in the classroom, and yet, each morning the Supreme Court opened for discussion, the session began with an “invocation for Divine Protection.”

The national motto is the national motto for a reason. Aspects of the motto, as well as the Founders’ inspirations can be seen in every facet of everyday life. To bring under attack the use of the phrase, “In God We Trust” also brings under attack a number of other parts of American life.

The free expression of religion is the first liberty listed in the Constitution’s First Amendment. Whether an individual is religious or not, they should recognize the historical context and importance of religion not only in America, but also throughout the world.