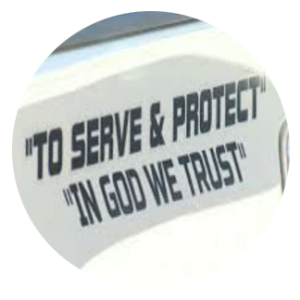 In God We Trust Case

First Liberty Institute is representing Police Chief Adrian Garcia of Childress, Texas, and his right to display the National Motto. Garcia received a letter from Freedom From Religion Foundation (FFRF) in September 2015 demanding that he remove the “In God We Trust” decals from his department’s vehicles. First Liberty Institute offers to represent any police or sheriff department that receives a similar harassing letter from the FFRF.

Garcia’s decision to display the national motto on his department’s vehicles was inspired shortly after the ambush and murder of Harris County Deputy Sheriff Darren Goforth.

Garcia went to Facebook with a photo revealing the new decals.

Like many other police chiefs and sheriffs throughout the country, Police Chief Adrian Garcia of Childress, Texas received a letter from FFRF demanding that he remove “In God We Trust” from his police cruisers. Instead of complying, Garcia replied by letter to FFRF and contacted First Liberty.

Garcia’s refusal to comply with the FFRF’s demands garnered national attention, with constitutional experts quick to highlight the historical and judicial arguments for the public display of the national motto.

“Throughout America’s history, the phrase ‘In God We Trust’ has been honored and celebrated as an expression of what it means to be an American,” wrote Jeremy Dys, First Liberty Institute Senior Counsel in an editorial in September. “Any effort to remove it from our currency, silence its public utterance, sandblast it from our walls or paint over its display should be rejected as bald efforts to rewrite our history and destroy our heritage.”

“The idea that it’s illegal for police or sheriffs to have the national motto on their car is ridiculous,” said Kelly Shackelford, President and CEO of First Liberty.

Shackelford added, “The America the complainers are attempting to create would be a nation hostile to religion and its religious heritage. It would be a nation that strips any mention of God from public places or property. That might have worked in an atheist nation like the USSR, but it does not work in the United States of America.”

“‘In God We Trust’” is our nation’s motto,” said Hiram Sasser, First Liberty’s Deputy Chief Counsel. “It is on our money and on government buildings across the country. It is completely appropriate and lawful for officers to place the national motto on police vehicles.”

“Officers are using the national motto as a patriotic way to rally together and boost morale at a time of turmoil in our nation,” Sasser continued. “They deserve support—not harassment. Law enforcement officers risk their lives daily to keep the rest of us safe. In a time like this, distractions like unfounded letters from FFRF are the last thing they need.”

Support from the Attorney General

In a letter dated November 4, 2015, Texas Attorney General Ken Paxton submitted an official opinion to Texas State Senator Charles Perry in support of the “In God We Trust” wording. Attorney General Paxton argued that the display of the national motto by the Childress, Texas police department and other law enforcement does not violate the U.S. Constitution’s Establishment Clause.

“Displaying ‘In God We Trust’ on police vehicles is a passive use of a motto steeped in our nation’s history that does not coerce citizen approval or participation,” the letter stated.

The opinion referenced multiple past court decisions that affirmed the legality of the motto’s public display as consistent with “our nation’s historical practices and understandings.”

The opinion quoted from the U.S. Supreme Court case Lynch v. Donnelly (1984), which stated: “‘There is an unbroken history of official acknowledgement by all three branches of government of the role of religion in American life from at least 1789.’”

Paxton concluded by postulating “a court is likely to conclude that a law enforcement department’s display of the national motto, ‘In God We Trust,’ on its patrol vehicles is permissible under the Establishment Clause of the United States Constitution.” 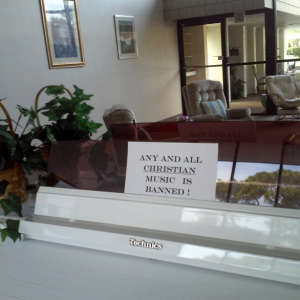 Condominium Board of Directors bans religion from premises