Issues: Religious Liberty in the Military

The men and women in our military risk their lives to defend freedom on a daily basis—and yet their own most basic freedom of religious liberty is often at risk. First Liberty Institute is on the front lines in the battle for religious liberty for all in the military.

Seasoned in defending active service members, veterans, and veterans memorials, we work to ensure that:

Arming You With Resources

The first step anyone can take to prevent hostility against members of the military because of their religious beliefs or practices is to become educated on religious liberty rights in the military.

Visit our Rights and Resources page for more.

Service members, chaplains, and veterans who are being prohibited from freely exercising their faith can call toll-free 1-800-259-9109 to report instances of abuse. 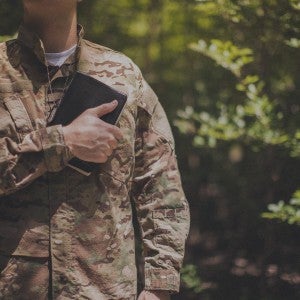 Victories: In the Military

Marine Court-Martialed for Posting Bible Verse Marine Lance Corporal Monifa Sterling was court-martialed for posting a Bible verse in her workspace at Camp Lejeune. At her trial and on appeal, LCpl Sterling invoked the federal Religious Freedom Restoration Act (“RFRA”) in her defense. However, the appeals court said RFRA did […]