Kelly Shackelford, president of the largest law firm in the nation dedicated solely to defending religious freedom for all Americans, will provide analysis of Zubik v. Burwell 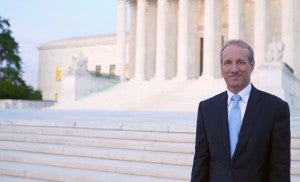 WHAT: On Wednesday, March 23, the U.S. Supreme Court will hear oral arguments on the case of Zubik v. Burwell, one of the most important religious liberty cases of the year. In this case, several plaintiffs, including the Little Sisters of the Poor, have asked the government to exempt them from being required to cover contraceptives in their healthcare plans due to their religious beliefs. Constitutional scholar Kelly Shackelford will attend oral arguments and be available immediately afterwards to provide analysis on what happens next.

WHO: Subject: Kelly Shackelford, President and CEO of First Liberty Institute. Shackelford is a constitutional scholar who has argued before the United States Supreme Court, testified before the U.S. House and Senate, and has won a number of landmark First Amendment cases. He has been a guest on shows such as Good Morning America, The Today Show, The O’Reilly Factor, CNN, as well as being featured in the National Law Journal, The New York Times, The Washington Post, and many others. Read more

WHERE: In front of the United States Supreme Court Building

Liberty Institute President and CEO Kelly Shackelford says, “The government is giving the Little Sisters of the Poor two options: violate their faith or pay millions of dollars in fines. There is a simple, common sense solution instead. The government should protect the nuns’ conscience rights by giving them an exemption, which has already been given to many big businesses, and leave them alone to fulfill their vows to God in peace.”

First Liberty Institute is the largest legal organization in the nation dedicated exclusively to defending religious freedom for all Americans. Read more at FirstLiberty.org