This Tag is Faith

As Kenneth Davis, a U.S. Air Force and Marine veteran puts it: “This tag is faith. This is believing that you’re going to live—and that even if you die, you’ll be holding hands with God for eternity. That’s what it means to me…and every veteran I know feels the same way.”

This is exactly why Shields of Strength founder, Kenny Vaughan, began sharing the tags with military members over two decades ago.

But once again, Mikey Weinstein and his deceptively-named Military Religious Freedom Foundation (MRFF) have decided to invent a problem where none exists.

In a brazen attack against religious liberty in the military, they recently sent a legal demand to the Department of Defense threatening Shields of Strength. MRFF claims the dog tags are unconstitutional, and that it’s illegal to display religious messages on them because they include the emblem of several service branches. What’s more, they demand the tags be pulled immediately.

We will not stand for such blatant religious harassment. It’s not going to happen on our watch—but it’s going to take all of us coming together to achieve victory for Shields of Strength.

Please join us as we fight for the rights of our veterans and servicemembers. They need YOUR support to help put a stop to the barrage of violations against their religious liberty—including their constitutional right to wear religious jewelry and find strength in their faith. 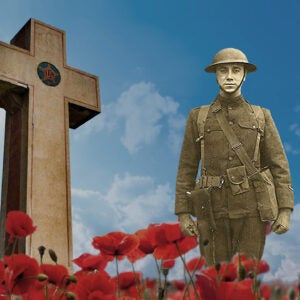 100 Years of the Cross: A Veterans Day Special

In 2019, First Liberty protected the Bladensburg Peace Cross with a landmark U.S. Supreme Court victory. The Cross has been standing for over 100 years and now the memorial has been restored and was rededicated on Veterans Day.

Lea Patterson shares why First Liberty is defending a Ten Commandments monument in Little Rock. She also explains how the Coach Kennedy victory at the Supreme Court will now play into the outcome in Arkansas.