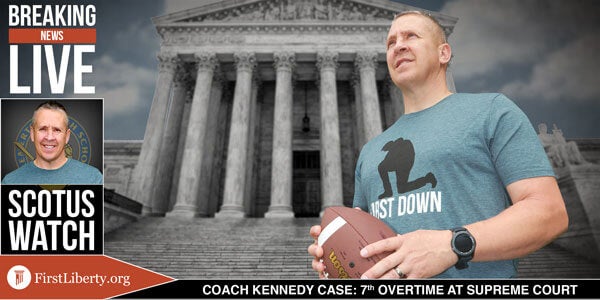 For those of you who watched the LSU v. Texas A&M during Thanksgiving, you know what it’s like to be on the edge of your seat. After 7 overtimes – in what some sports critics are calling the best college football game of 2018 – the final win was decided by only two points.

What are we referring to?

Since the beginning of the current U.S. Supreme Court term, which started back in October, we’ve been waiting on a response regarding Coach Kennedy’s petition. As the weeks have gone by, Coach Kennedy’s case keeps getting “relisted” on the SCOTUS docket. And the last time we checked, his case has been relisted a total of 7 times.

How’s that for a 7th overtime round?!

So while we wait on the High Court’s response or decision on Coach Kennedy’s case, we thought you’d want to know some behind-the-scenes insight on how the Supreme Court chooses and deliberates on cases.

First things first. You’re probably wondering: what exactly does it mean when a Supreme Court case is “relisted?”

Each week, the 9 Justices get together for a conference where they talk about what cases they’ll hear, or which cases they’ll reject or send back to a lower court.

So when a case is “relisted” on the SCOTUS docket, it commonly means that the Justices haven’t yet reached an agreement and have tabled the discussion of that specific case for their next meeting.

Of course, on the surface “relisted” may sound like the Court’s just punting off a case or kicking the can down the road, but in some instances a relisting can actually be a positive sign.

Recall in a typical sitting, the Supreme Court hears less than 80 cases, roughly 1% of the thousands and thousands of cases submitted to it. Because of the Court’s limited time, it usually reserves its energy to deliberate on those cases that will address some of the most important and pressing constitutional issues of the day.

So when the Supreme Court does not reject a case outright, it could mean that something in that case grabbed the attention of the Justices, and that’s often triggered only by those cases that have some type of core constitutional issue. In other words, if a case keeps getting relisted – but not rejected – then it’s a sign that the Justices need more time to decide whether or not they will hear oral arguments.

That could be what’s happening in Coach Kennedy’s case.

But we should emphasize this isn’t the first time that we’ve gone through an extended overtime series with a Supreme Court petition.

In last year’s term, Mary Anne Sause’s case was also relisted a total of 7 times before the Supreme Court issued its final decision. But in the end – despite the nail-biting anticipation of 7 relistings – the Supreme Court handed down a key religious freedom victory reaffirming the constitutional right of Americans to pray and live out their faith in their own homes.

With all this in mind, we remember an old saying, “Good things are worth waiting for.”

So as we await a response on Coach Kennedy’s case, it’s possible that we may very well be anticipating a precedent-setting ruling – or a decision that could pave the way for future religious freedom cases at the U.S. Supreme Court.