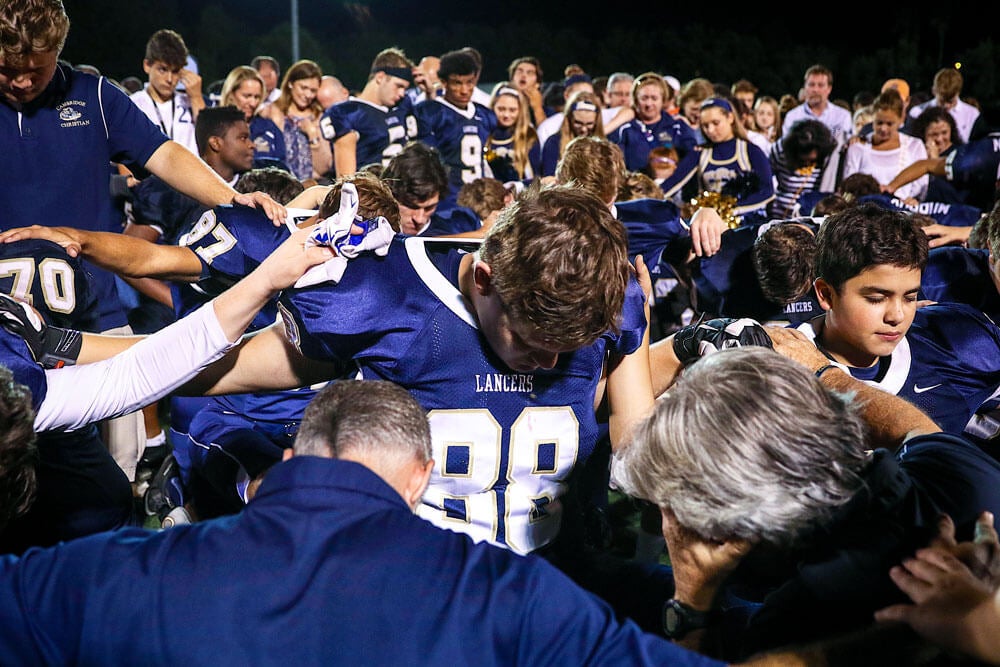 Cambridge players, parents, and fans praying together after a regular season game in 2015.

Should private religious expression that takes place on public property be redefined as “public speech”—then restricted or even banned on the grounds of “separation of church and state”?

In 2015, the Florida High School Athletic Association (FHSAA) forbade the school from praying over the loudspeaker before kickoff at the Citrus Bowl where they were playing the state championship football game. This ban occurred even though both teams were Christian schools and had a tradition of prayer before games.

In February, a federal district judge sided with the FHSAA. In June, First Liberty appealed the case to the federal Court of Appeals, which is one level below the U.S. Supreme Court.

“By banning two private Christian schools from praying over the loudspeaker before a football game while allowing other, non-religious messages to come across the same speaker, the FHSAA is telling high school kids that prayer in public is wrong,” said Jeremy Dys, Deputy General Counsel for First Liberty.

Dys added, “We hope the Eleventh Circuit will recognize this for what it is: an assault on the First Amendment and the censorship of religious speech—simply because it is religious—of two private, Christian schools.”

Prior to the 2015 championship game, CCS asked to continue their tradition of opening the game with prayer over the loudspeaker, a long-standing tradition that allows students on the field and their parents and fans in the stands to unite prior to kickoff.

Should it be illegal to talk about your faith on a public sidewalk just because the ground is owned by the government?

The FHSAA refused, suggesting that because the stadium was city-owned and the FHSAA a state agency, it would violate the Constitution to allow two private Christian schools to pray for less than a minute over a state-owned microphone.

“Those who want to restrict religious freedom have long told religious students that if you want to pray in school, then they have to attend a private, religious school. Now those students are being told they cannot pray in public,” said Dys. “Where else do these religious students have to go? Must they now form their own league in order to exercise the rights guaranteed to them under the Constitution?”

WHERE COULD IT LEAD?

If people of any faith are banned from using a microphone to pray with others of the same faith in attendance just because the government owns the microphone, those who defend religious liberty are concerned that it won’t stop there.

Kelly Shackelford, President and CEO of First Liberty, said, “Almost any religious speech outside your home or church could be designated ‘public’ and therefore banned. The foes of religious liberty are turning public religious speech into something that’s not protected, saying that it’s now government speech.”

He urges Americans to look at the overall direction in which this case is pointing and ask fundamental questions about where it could lead.

Should it be illegal to talk about your faith on a public sidewalk just because the ground is owned by the government?

Should it be against the law to sing hymns or have a Bible study in a public park because it is government property? First Liberty has defended clients—including a group of senior citizens—in just such a case.

Should Americans conceal necklaces with crosses or Stars of David inside public buildings? First Liberty has also represented a client, college student Audrey Jarvis, in such a situation.

“These are questions Americans are right to take very seriously,” he says. “What we are deciding in this case and others like it is nothing less than what kind of America our children will inherit.”