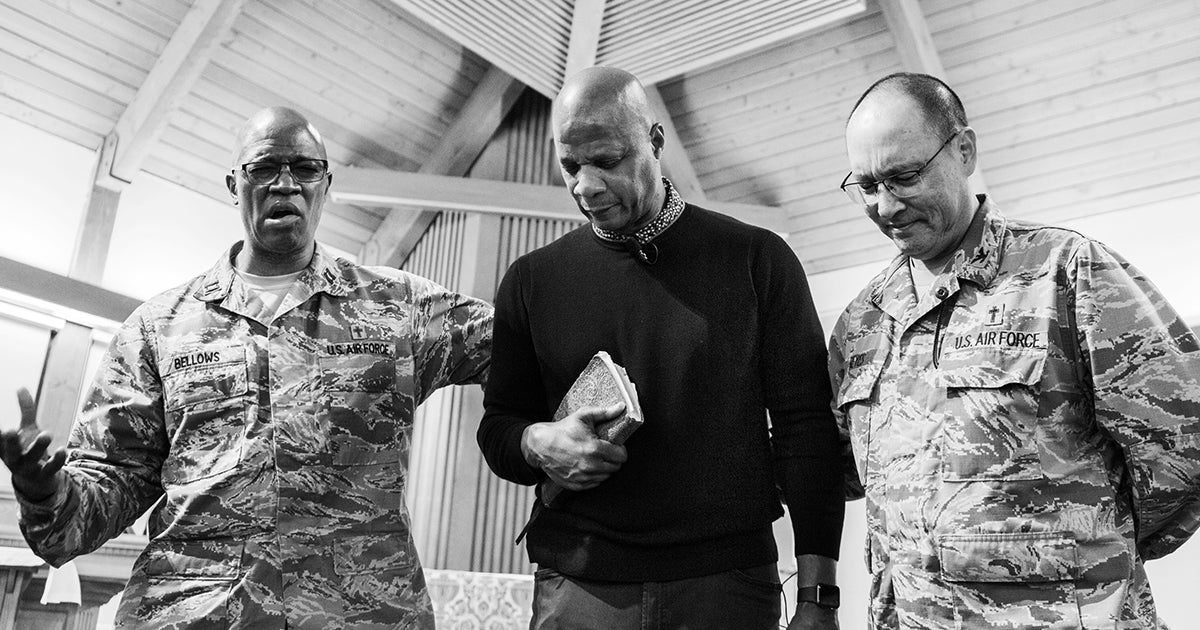 365 days a year, seven days a week and 24 hours a day, members of the U.S. military are on call around the world, defending our liberties and keeping us safe.

Because of their selfless service, our nation observes May as Military Appreciation Month.

From Military Spouse Appreciation Day, Armed Forces Day, VE Day to Memorial Day, there are many observances to help us reflect on the immense sacrifices of our men and women in uniform. Each of these specific holidays carries deep significance, and they offer special opportunities to express our gratitude.

Service members pay a high price to defend our constitutional rights and liberties—including the freedom to live out our faith. They courageously fight for us, sometimes putting their lives in great danger and some even make the ultimate sacrifice—all so that we can live in liberty.

Despite our military heroes putting everything on the line, there are radical groups fixated on taking away the same freedoms they fight to protect. But the threat isn’t just external. Some inside the military vehemently oppose religious expression, and they continue harassing and punishing service members who want to serve in a manner consistent with their beliefs.

There are many ways to show our support and gratitude for our men and women in uniform. One of those is by defending and protecting their religious freedom. 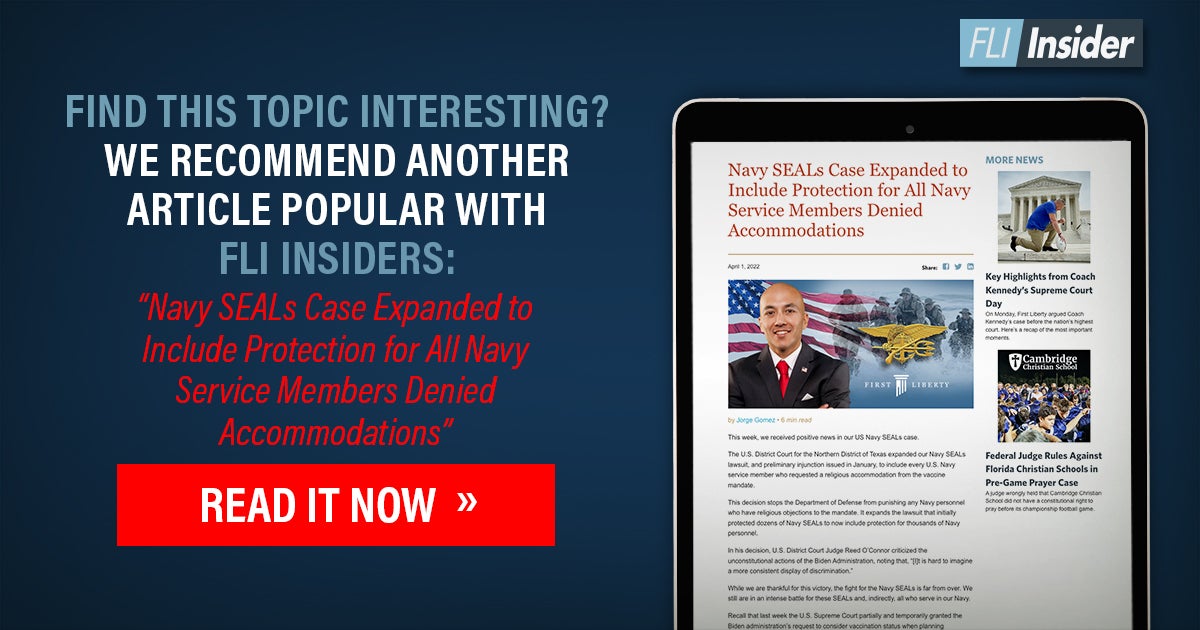 These brave warriors dedicate years of their lives, sacrificing themselves physically and mentally through rigorous training. Collectively, they have more than 350 years of military service and more than 100 combat deployments. Not to mention, they’re the ones sent on highly dangerous missions, often in the most hostile areas around the world.

Shockingly, the Department of Defense (DoD) and the Biden administration are threatening their careers—all because they’ve requested a legal, religious accommodation to the military vaccine mandate. For wanting to serve in accordance with their beliefs, these SEALs have been threatened with involuntary separation, denied from advancement opportunities and in some cases even denied medical care.

This mistreatment of our nation’s most elite fighters is outrageous and illegal. Forcing them to choose between their faith and serving their country dishonors the sacrifices they make to keep us free.

First Liberty continues fighting for our Navy SEALs. We’ve secured several key victories over the last several months. These wins have helped protect our clients from further punishment and, thanks to a class action, have extended protection to thousands of Navy personnel with religious objections to the mandate.

However, the fight is far from over. Their case is pending in federal court, which means we’re still in an intense battle for their rights.

We’re also in a crucial federal court battle for our client, Shields of Strength. For more than 20 years, this Christian company has graciously provided replica dog tags with inspirational Bible verses to active-duty service members and veterans who want them.

Our military community greatly appreciates these dog tags. To our heroes and their loved ones, these Scripture-inscribed tags are much more than just pieces of metal on a chain. They are a source of reassurance, a symbol of sacrifice and a tangible reminder of the strength gained through their faith. To date, more than five million have been given to hundreds of thousands of U.S. military service members, veterans, first responders and the families of fallen heroes.

But an outside, radical organization complained about the tags to the DoD. This prompted the U.S. Army Trademark Licensing Office and the U.S. Marine Corps to ban the company from producing tags with military insignia or logos alongside religious messages.

It’s harsh and unkind to deny our service members the right to wear them just because they have a religious message. Far from making our nation’s heroes feel appreciated, it’s a cruel insult to rip away this source of inspiration and encouragement.

This Military Appreciation Month, we encourage you to join First Liberty in the legal battle to restore and protect religious liberty for service members.

The cases we’re fighting right now could have a major impact on the freedoms of our clients and thousands serving in the military. With your continued support, we can let them know: We appreciate your selfless service and sacrifice. We will never give up our fight to make sure you’re free to serve both God and country. 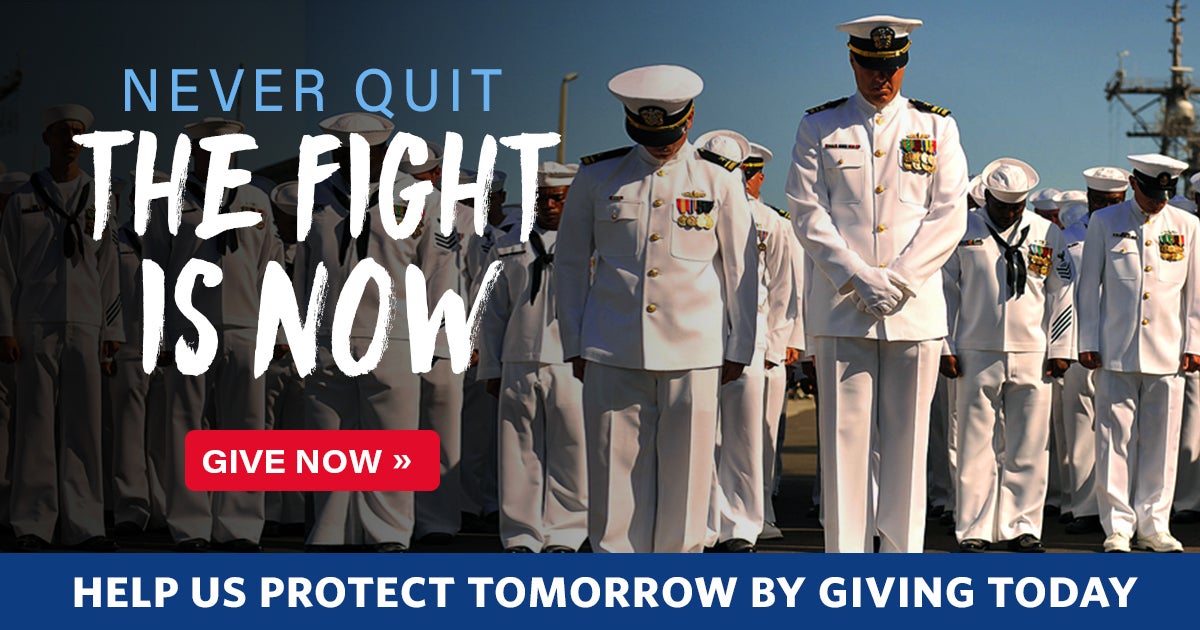