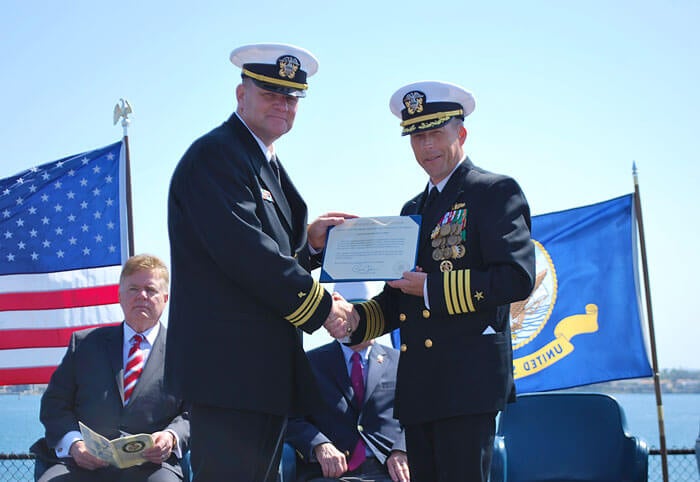 U.S. Navy Chaplain Wes Modder celebrated a special retirement ceremony on Tuesday aboard the historic USS Midway in San Diego after more than 20 years of service.

Yet less than two years ago, his entire career was put on the line after he became a victim of religious discrimination.

“If those discriminating against Chaplain Modder had been allowed to go unchecked, who knows if we would have witnessed his retirement ceremony this week,” Berry said. “This is why we do what we do.”

In a private event with close friends and family before the official ceremony began, Modder said he is “friends for life with First Liberty,” expressing his appreciation for its attorneys and supporters as he recounted the beginning of his legal battle nearly two years ago.

At a loss, Modder said he called friends at a ministry in California. They told him to call First Liberty Institute. He did—and was connected with Berry, who had served in the Marines like Modder.

“Mike Berry said, ‘don’t do anything, we’re coming for you,’” Modder recalled, emphasizing how much that meant coming from another Marine.

“Thank you Mike, Hiram and Kelly, the supporters of First Liberty,” he said. “I’m indebted to you for the rest of my life … Thank you for what you do. You are making a difference, because there’s a lot more chaplains that don’t know what to do or where to go.”

“You’ve made a difference in my life and in my ministry,” he added. “I couldn’t have done it without you.”

ATTACKED FOR HIS BELIEFS

A veteran of Operations Desert Shield and Desert Storm, and former chaplain to U.S. Navy SEALs, Modder received multiple accolades and awards throughout his two decades of service. Modder’s commanders described his performance as “essential” and a “national asset.” He was given the most important assignments—roles where the value of a chaplain is critical to America’s service members and military mission.

Then the unthinkable happened.

This “best of the best” chaplain and officer (Modder’s rank was Lieutenant Commander) became the target of an ugly campaign of religious hostility that threatened to jeopardize the chaplaincy itself. “If an exemplary chaplain like Wes Modder can be forced out of the military due to his religious beliefs, who is safe?” said Mike Berry, recalling the battle.

First, in October of 2014 a few sailors asked about Modder’s personal beliefs regarding marriage during a private counseling session.

When Modder pointed to passages in the Bible to explain his personal beliefs—beliefs also in line with his sponsoring denomination that, if violated, could cost him his position as chaplain—the sailors complained to Captain John Fahs, Modder’s commanding officer.

Even though military and federal laws forbid adverse action against a chaplain based on his beliefs, Fahs responded to the complaints by removing Chaplain Modder from his unit and isolating him at the base chapel, cutting him off from his sailors and forbidding him to minister to their spiritual needs.

Then Fahs requested that Modder be removed from the promotion list, detached for cause (the equivalent of being terminated) and brought before a Board of Inquiry that could force him out of the Navy. Such a move could have cost Modder’s military pension and benefits, though at the time he had already served for 19 years.

In March of 2015, First Liberty Institute sent a demand letter to the Navy—the first of many legal actions that culminated in a formal military grievance against Captain Fahs in June of 2015. Confident of an eventual, though hard fought, victory, First Liberty recruited a top national law firm as volunteer counsel and prepared for prolonged legal conflict.

But the initial case for Chaplain Modder was so powerful, and the facts and law made so clear, that victory was surprising and sudden. After two denials of appeals within the military, at the last level of appeal, in September of 2015, the Navy reversed the decision and rejected all threatened punishment against Modder, restoring him to full service. In fact, he was given a choice assignment.

The resounding exoneration sent a message throughout the entire military.

According to Berry, the victory was critical for protecting the religious freedom of all military chaplains and service members.

“This is not only a great day for Chaplain Modder, but for every American who supports religious freedom in our military,” he said at the time of Modder’s exoneration.

Kelly Shackelford agreed, saying he hoped the victory would send “a strong signal to military commanders—violated religious liberty will not be tolerated.”

“Military and federal laws exist to protect religious freedom for all American citizens, including military members,” Berry said. “The idea that service members lose all their personal rights upon entering the military is false.”

The victory added to a string of wins for religious freedom in the military in First Liberty legal matters:

Despite such victories, religious discrimination in the military still takes place, and is often difficult to correct, Berry said, noting First Liberty’s extended legal battle on behalf of LCpl Monifa Sterling, a Marine court-martialed for refusing to remove Bible verses from her personal work area. First Liberty is preparing to appeal her case to the Supreme Court.

But Tuesday, September 6, was a day to celebrate—to honor a hero. And to rejoice that religious freedom is alive in the military if service members—from command down through the ranks—understand and obey the law.