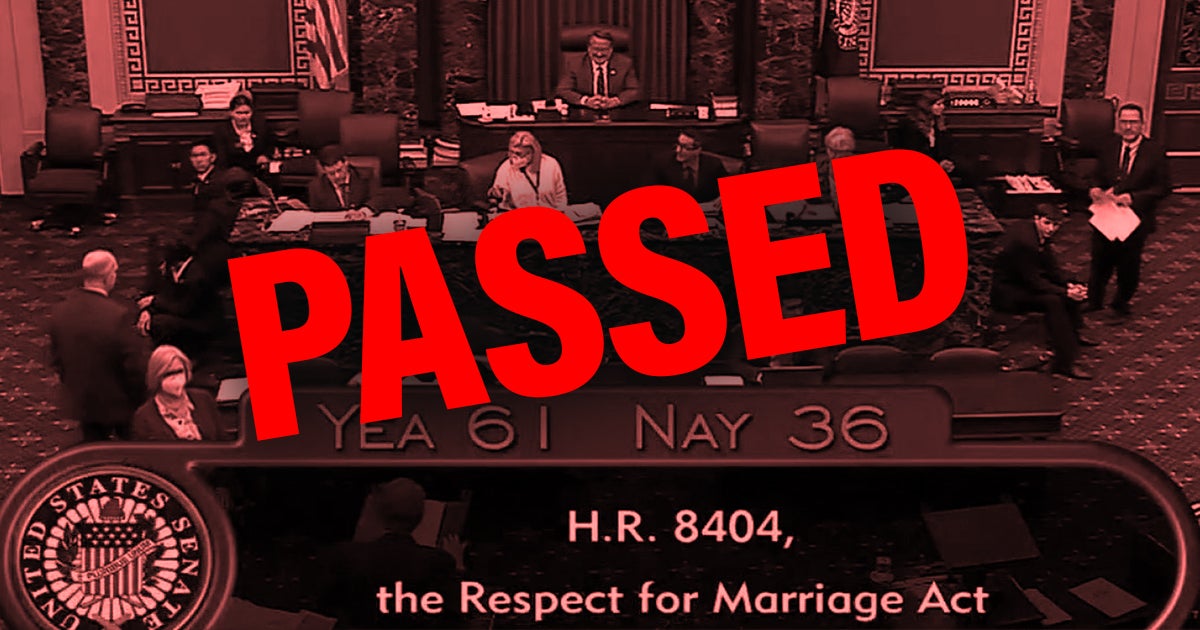 Both the U.S. House and Senate have passed the deceptive “Respect for Marriage Act,” a bill that would redefine marriage into federal law and create new attacks against religious freedom. The bill will make its way to President Biden, who has promised to sign it into law.

If enacted, the bill establishes the United States’ official legal position of regarding same-sex unions as equivalent to marriage between one man and one woman.

Next, shockingly the bill authorizes the U.S. Department of Justice to file taxpayer-funded lawsuits against those deemed to be non-compliant with the federal government’s new definition of marriage. And if that were not enough, it also empowers private citizens and groups to sue Americans of faith, because of their beliefs on marriage. Federal bureaucrats could also likely feel empowered to deny tax-exempt status and federal benefits to those who believe in the time-honored definition of marriage.

The bill’s supporters like to claim the “Respect for Marriage Act” still protects religious liberty rights, but the bill’s provisions in that regard are narrow and weak. Notably, the current version contains absolutely no protections for Americans of faith who work for the largest employer in the United States—the federal government.

It offers no protection for for-profit businesses such as florists, bakers, and website designers who do not wish to be forced to use their artistic talents and skills to endorse same-sex weddings. The bill has no protections for government chaplains, who must faithfully serve the spiritual needs of their communities, but without violating their religious beliefs. Using this bill, the IRS can attack houses of worship and faith-based non-profit charities to deny them tax-exempt status. Using the full force of the federal government, this bill could be weaponized to chill the free speech of Americans.

One thing is clear: Congress does not have the authority to pass laws violating the First Amendment of the U.S. Constitution. First Liberty, as experts on religious freedom, has been closely tracking the bill as it moves through Congress and are exploring potential legal actions if it becomes law.

First Liberty has been first in the fight to protect First Amendment rights to freely exercise religion in each of the areas under attack in this bill. We’ve successfully ensured that for-profit Chick-fil-A could sell sandwiches at an airport when a city tried to ban them. We protected Army Major chaplain Scott Squires from retaliation for declining to lead a marriage retreat for same-sex couples, which would have violated his faith and his denomination. We’ve also ensured non-profit Christians Engaged could not be denied tax-exempt status for their belief in Biblical marriage.

Today, First Liberty is continuing the fight by defending the rights of baker Melissa Klein to create only custom wedding cakes celebrating the union of one man and one woman. We are representing Alaska Airlines employees’ who want the right to express their faith-based opinion about troubling legislation in the workplace. And our helpline is open to others who need legal advice. If people of any faith are threatened or attacked, the First Liberty team is ready and available. Contact First Liberty’s legal help line here.