FIRST IN THE FIGHT: Top Battlefronts for Religious Liberty in 2018

Courtroom showdowns over the next 12 months could be the turning point for religious liberty in America. 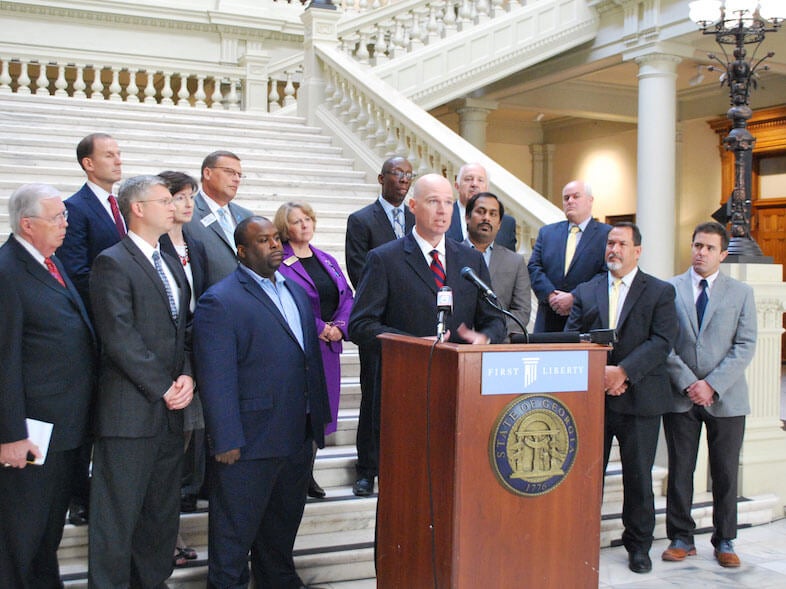 An ancient war proverb advises, “Success in warfare is gained by carefully accommodating ourselves to the enemy’s purpose.” Victory comes from studying opponents carefully, anticipating and calculating their moves. The lesson behind that old saying still rings true in today’s fight for religious freedom.

Looking back on First Liberty’s key victories in 2017, it is clear that success comes from acting early and decisively. In protecting and defending religious freedom, First Liberty’s legal strategy is built on a simple and effective principle:

Be the first in the fight.

Last year, anti-religion groups and other radical opponents stepped up their efforts, fundraising aggressively to fill their war chests. Throughout 2017, the opposition organized its formations and pounced on any opening to come after the religious freedom of everyday Americans.

In preparation for an escalation of such attacks in 2018, First Liberty attorneys are keeping a vigilant eye on the courtroom battles looming on the horizon, taking proactive steps to stay ahead of the opposition. As religious liberty is coming under attack from multiple sides, First Liberty is planning for the top battlefronts in 2018.

Throughout the country, government officials have increasingly engaged in unconstitutional actions, imposing and dictating where religious organizations can minister and even what they can do in their services. Government agencies have also discriminated against churches through restrictive zoning laws, refusing to grant land-use permits, or withholding public assistance based on regulations that ban religious organizations.

Similar incidents will likely arise in 2018 and our attorneys will be ready to respond to the fight. First. Fast. Effectively. It is a proven strategy that has brought victory in the past, so we intend to continue it in the coming 12 months.

On the west coast, First Liberty successfully defended the Chabad of Irvine – an Orthodox Jewish synagogue in California – from a radical group attempting to prevent a millennium-old religious ceremony. Despite our victory, these radical activists filed a federal lawsuit against other Orthodox Jewish communities in Los Angeles. Our attorneys are defending these communities and the case is now one step below the U.S. Supreme Court.

That’s just one example. As government agencies and extremist groups continue to threaten the religious freedom of houses of worship, defenders of our first freedom must be first to the battle. And that means constant vigilance.

Faith-based businesses and their owners are being coerced, bullied – even bankrupted – into violating their religious beliefs. 2018 will be critical in answering whether business owners must abandon their religious convictions or risk losing everything.

After a shocking decision from the Oregon Court of Appeals, First Liberty clients Aaron and Melissa Klein are wondering what their future holds. A state agency penalized their small, family-owned bakery $135,000 for politely declining – on religious grounds – to create a custom cake that celebrated a same-sex marriage. The penalty forced the closure of their bakery.

2018 is set to be a landmark year for millions of business owners like the Kleins. A victory in their case could set a precedent solidifying the religious liberty of creative professionals and working artisans throughout America.

2018 promises to bring more showdowns for service members who have been reprimanded – at times punished – for expressing their religious beliefs.

Currently, First Liberty is representing Colonel Michael A. Madrid, whose 26-year military career is in serious peril because his religious views were misrepresented.

Additionally, First Liberty took instant action when 33-year Air Force veteran, Oscar Rodriguez, was physically assaulted and removed from a private retirement ceremony on a military base, simply because he planned to say the word “God” in his speech.

First Liberty attorneys are also defending the Bladensburg WWI Veterans Memorial. The U.S. Supreme Court could hear this case and decide whether the memorial will be torn down. Losing this case would put hundreds of veterans memorials – including those in Arlington National Cemetery – in danger of being defaced, destroyed, or removed.

Is prayer now being seen as a plague in America? Federal courts are hearing prayer cases at an alarming rate, as opponents seek to punish any who dare pray in public settings, even if those prayers are their own private expression.

So what is the opposition’s purpose? Simply to redefine more private prayer as “public” (i.e. government speech) so that they can make a hollow legal claim that it should be prohibited. The more private prayer that is redefined, the less any prayer in public will be legal!

In 2018, the U.S. Court of Appeals for the Ninth Circuit will likely determine the fate of high-school football coach Joe Kennedy, fired by Washington State officials for taking a knee on the field after games in a 15-second, silent prayer.

The Eleventh Circuit could also issue a ruling in the case of two Christian schools banned by the powerful Florida High School Athletic Association (FHSAA) from using a stadium speaker system to pray before a championship game.

In 2018, religious schools and people of faith will await the decisions of federal courts – and possibly the U.S. Supreme Court – in many cases involving public prayer. First Liberty attorneys predict that a positive outcome in these cases would affirm prior U.S. Supreme Court precedent that preserves the religious freedom of millions of Americans.

ENLISTED IN AN HONORABLE FIGHT

The Founding Fathers fought arduously to enshrine religious freedom in the Constitution, ensuring that it would be an inalienable right granted to all Americans. Their sacrifice for this precious freedom teaches us that preserving it comes with a great responsibility – and at times, a high cost. Like the Founders, we have been called to the front lines and have the same duty – to fight boldly for religious liberty.

The New Year is expected to bring fierce fights for the First Amendment and its legacy. In 2018, America’s first freedom hangs on the balance. The opportunities for victory are contrasted by some challenges. The legal battles and pending litigation this year will shape the course of religious liberty today and for the next generation.