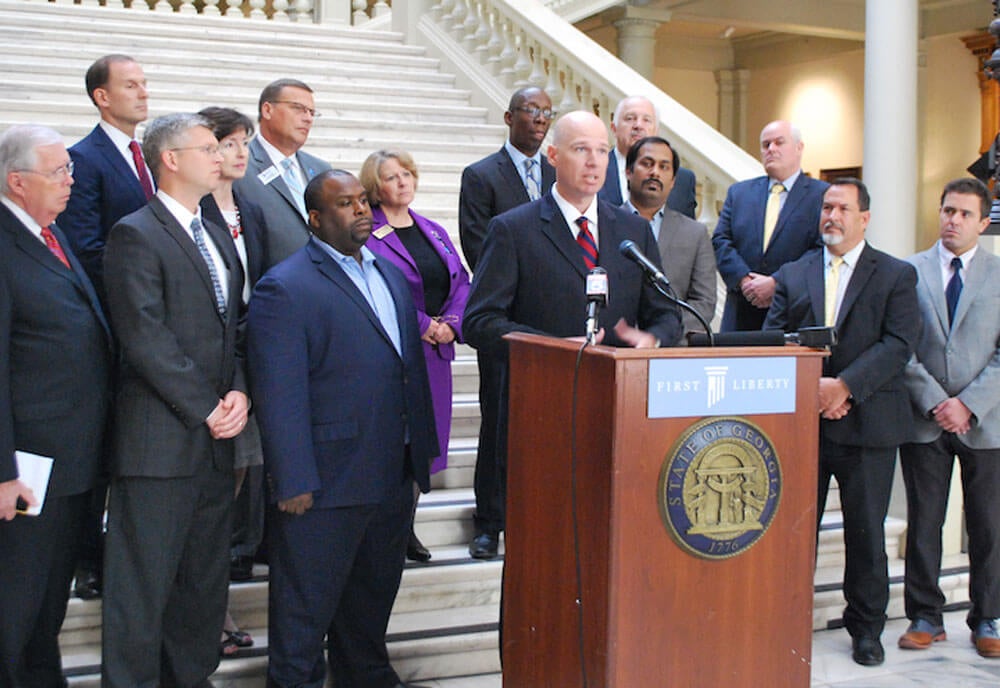 “I am pleased this trial finally ended,” Dr. Eric Walsh said. “It’s been a long, difficult journey, but it’s worth it to have my name cleared and to ensure that all Georgia government employees know they have religious liberty.”

“This is a clear and resounding victory for religious freedom. We always knew the law was on our side, so we are pleased the State of Georgia agreed to settle this case and clear Dr. Walsh’s good name.”

Dr. Walsh, a lay minister and former Georgia government employee, filed a lawsuit against the Georgia Department of Public Health (DPH) after evidenced surfaced that he had been fired because of his religious beliefs.

Dr. Eric Walsh’s list of accomplishments is long and diverse. Holding both a medical degree and a Doctorate in Public Health (Dr.P.H.), Walsh was appointed to President Obama’s Presidential Advisory Council on HIV/AIDs.

Walsh also served as a lay pastor in his Seventh-day Adventist Church.

In May 2014, Dr. Walsh accepted a job offer as District Health Director from the Georgia DPH. He made plans to move his family across the country from California. However, the week after he was hired, state officials requested copies of his sermons and searched online for others. His sermon topics included following Christ, having compassion on the poor, caring for the sick, world religions, and more.

On May 14, the DPH Director of Human Resources sent an email to other department employees, stating:

“OK…I have an assignment for several of us. We have to listen to his sermons on YouTube tonight. If we take a couple of hours each, then we should cover our bases.” (View the email)

The morning after DPH officials divided up Dr. Walsh’s sermons for review, they held a meeting to discuss his employment at DPH.

The next day, they fired him.

They called Dr. Walsh to inform him of his termination, but the call went to Dr. Walsh’s voicemail. Dr. Walsh was shocked to hear the end of the voicemail, where DPH officials were laughing and using words like “you’re out,” after they apparently thought the call had ended. (Listen to the voicemail)

On September 23, 2014, First Liberty, along with lead counsel from the law firm of Parks, Chesin & Walbert, filed an official charge of discrimination with the U.S. Equal Employment Opportunity Commission (EEOC) on Dr. Walsh’s behalf.

Federal law protects Walsh’s right to talk about his faith inside his church or out of it. In particular, Title VII of the Civil Rights Act of 1964 prohibits the government from firing people over their religious beliefs, especially when those beliefs are expressed by a lay minister, outside of work, in a church setting.

“If the government is allowed to fire someone over what he said in his sermons, then they can come after any of us for our beliefs on anything. We must ensure every American has the right to talk about their faith at church without getting fired or being barred from public service.”

“I am relieved to see this ordeal end and have my name cleared,” Dr. Eric Walsh says. “It has been a long, difficult journey, but I hope this positive outcome will encourage other public employees that they have religious freedom.”

“No one should be fired for simply expressing his religious beliefs,” Dys says. “We are pleased that the State of Georgia agreed to settle the case and acknowledge the right of their employees to express their religious beliefs.”

RELIGIOUS RIGHTS: WINNING IN THE WORKPLACE

First Liberty has now represented four victims of religious discrimination in the civilian workforce in the past three years in major lawsuits.

In every case—all four—the lawsuits were settled favorably for the victims.

First Liberty has also represented five clients in the military workforce. Four of those cases have ended favorably for the victims of discrimination, with one being appealed to the U.S. Supreme Court in what could be a sweeping victory.

“The verdict,” says Kelly Shackelford, First Liberty President and CEO, “is that religious rights win in the workplace. The law is on the side of religious freedom. People of faith can live openly where they work, and employers best not violate their rights.”