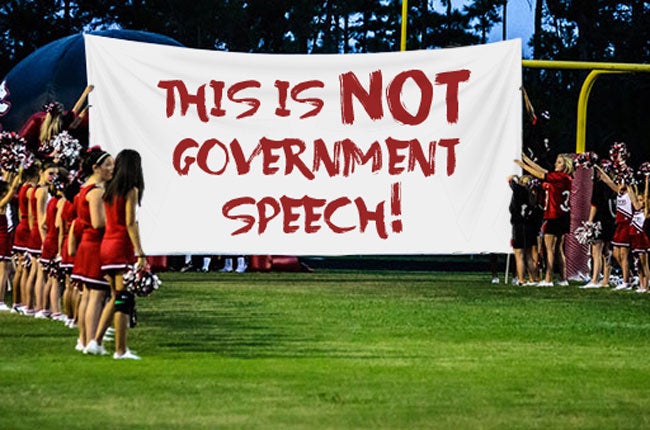 The six-year legal battle has made the Kountze cheerleader banners the most famous in high school football history as the case continues to gain worldwide attention.

But because of the KISD’s recent appeal, the cheerleaders could endure yet another unpleasant field trip to the high court of Texas. And more ominously, their First Amendment rights – and those of millions of other students – remain in jeopardy.

Hiram Sasser, General Counsel for First Liberty – which has represented the cheerleaders since 2012 – stated:

KISD’s most recent petition not only makes the cheerleaders’ lives more difficult, it shows that it is willing to take them into the courtroom countless times in order to eliminate any form of public religious expression. It also shows that defenders of freedom of speech and religion must remain committed to long, hard fights to safeguard liberty.

WHO OWNS THE WORDS?

The case began way back in 2012 when KISD’s superintendent decided to ban the religious banners, after receiving a complaint letter from the Wisconsin-based Freedom from Religion Foundation (FFRF). First Liberty then filed a lawsuit on behalf of the cheerleaders to prohibit government school officials from censoring their religious speech. The ACLU would later file an amicus brief against the cheerleaders. The lawsuit has been an intense legal battle that included numerous hearings and long days of depositions in which the cheerleaders endured hours of questioning.

Despite the legal victories upholding the rights of students to express their faith at school, KISD continues to assert that the cheerleaders’ banners are considered government speech, thus authorizing school district officials to censor the banners at their discretion.

However, the Ninth district court rejected KISD’s claims.  After evaluating the entire record, the court determined that the cheerleaders crafted their own messages which were “hand-painted in the Cheerleaders’ handwriting” using “private funds” for the paint and paper to make the banners “after regular school hours.” Thus, the court determined that “the pregame run-through banners cannot be characterized as government speech.”  In other words, as the court concluded, “the Cheerleaders’ speech expressed on the run-through banner is best characterized as the pure private speech of the students.”  And that “pure private speech” is protected by the First Amendment.

Although KISD insists on taking the matter back to court, case law is still on the side of the Kountze Cheerleaders. In addition to the rulings issued by the two Texas courts, the landmark U.S. Supreme Court decision – Tinker v. Des Moines ICSD (1969) – affirms that students retain their constitutional freedoms even when they cross the threshold of the schoolhouse.

“The school district cannot seem to accept that cheerleaders – and students – in our country have the right to free speech and religious liberty,” said Kelly Shackelford, President and CEO of First Liberty. “It is very disturbing when government persistently harasses citizens who express their beliefs, especially when it goes after the rights of middle and high school students.”

The Kountze Cheerleaders case is about much more than just high school football. It is about the constitutional rights of students throughout the state of Texas – and even nationwide. The religious and expressive rights of students have been confirmed time after time, but KISD has shown a stubborn resolve to challenge established legal precedents.

First Liberty will continue to represent the Kountze cheerleaders, regardless of the opposition’s obstinate efforts to deprive them of their fundamental rights to religious expression.