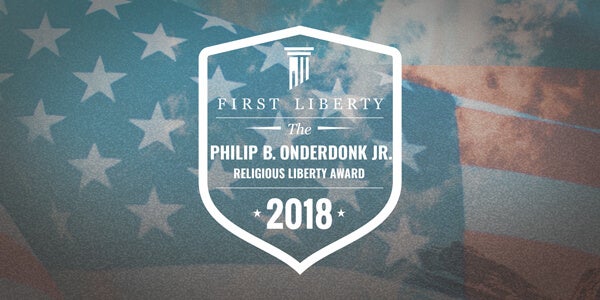 This year, First Liberty will be coming to you LIVE from Minneapolis!

Kelly Shackelford will announce our 2018 Philip B. Onderdonk Jr. Religious Liberty Award honoree at The American Legion’s national convention happening this year in one of Minnesota’s famous Twin Cities.

Every year, First Liberty Institute bestows the Philip B. Onderdonk Jr. Religious Liberty Award to one exceptional individual for his or her efforts to defend religious liberty.

And boy…we guarantee you won’t want to miss this year’s announcement!

We will be honoring a “Great American” who’s proven to be a staunch supporter of religious liberty and who’s delivered on the promise to make religious freedom a top priority.

And as much as we regret to keep you waiting and anticipating, you’ll just have to tune in August 30 for our Facebook live stream of The American Legion’s convention if you want to know who will be receiving this year’s award.

Tune in for the August 30 live stream of The American Legion’s National Convention & the 2018 Philip B. Onderdonk Jr. Religious Liberty Award!

Because of its deep connection with The American Legion and military service members, this special religious liberty award is marked with a rich history and prestige, making it much more than just another trophy or medal.

Instead, this award is something truly special and unique.

In short, this award recognizes that the imperative work of defending religious liberty in America is not something that any one of us can do alone. It takes brave individuals who courageously stand against the tide of religious hostility that’s currently plaguing our country.

And it takes everyday citizens – like you – who respect the Constitution and are willing to stand for the rights guaranteed therein to express and to live according to our religious beliefs.

Rewind back a few years, First Liberty originally commemorated and presented the award in 2015 to Philip B. Onderdonk, Jr., then National Judge Advocate of The American Legion and a hero and a protector of religious liberty.

In fact, First Liberty, Onderdonk, and The American Legion have collaborated successfully on numerous occasions to ensure that religious freedom would be preserved for military service members, especially through our defense of veterans memorials, such as the Mt. Soledad Veterans Memorial in San Diego, the Mojave Desert Veterans Memorial in California, and the Bladensburg WWI Veterans Memorial in Maryland.

Additionally, we have joined forces with The American Legion in other important incidents where religious liberty has been threatened in our nation’s schools and in the broader public arena – including our defense of the Pledge of Allegiance and our National Motto, “In God We Trust.”

Aptly, we named the award after Onderdonk, given our longstanding partnership with him and The American Legion, along with our successful joint efforts to restore and protect religious liberty for thousands of military service members and veterans. Today, we consider it an honor to continue granting this prestigious award in conjunction with one of the most distinguished veterans organizations in the country.

Learn how First Liberty and The American Legion have joined forces to defend religious freedom.