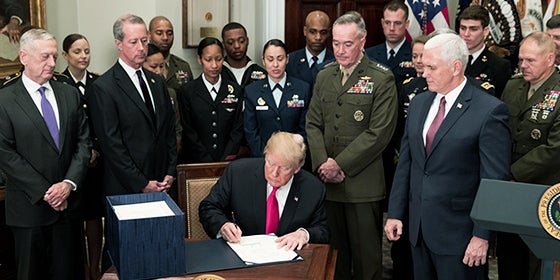 If you spend enough time with me, you’ll probably hear me say that the most powerful weapon in America’s military isn’t an aircraft carrier or a stealth bomber; it’s the patriot who answers the call to serve.

That’s what makes the month of May so special. It’s Military Appreciation Month, when we take time to commemorate the men and women who sacrifice to defend our rights and freedoms.

As an officer in the U.S. Marine Corps, I know first-hand what it means to answer that call and fight for the liberties that we hold so dear in our country. Military service isn’t easy by any means – but one of the greatest honors in my life has been to be a part of the mightiest military force on earth.

Serving in uniform is one way I’ve been able to defend and protect the Constitution. But I also have the privilege of serving my country as a religious liberty lawyer, fighting on the legal battlefront for military service members and veterans whose religious freedom has been attacked or taken away.

Our service members sacrifice so much to defend our constitutional rights – and it’s a shame that they are being deprived of the same freedoms they fought to protect. And it’s hard on me personally when I see them lose the same freedoms for which they fight.

The truth is that assaults on the religious liberties of men and women in uniform have become far too frequent. We’ve had to represent an inordinate number of military religious freedom clients over the years. That number just keeps growing, and each new attack on freedom seems worse than the last.

Here are a handful of recent examples:

When you look at these incidents – as well as the numerous other military cases we’ve had to fight – it appears as if the Constitution has taken a back seat in the military.

It’s ironic that the Pentagon is often dubbed the “Puzzle Palace,” because it’s truly puzzling to see military officials tripping over themselves when it comes to religious freedom. After all, the President issued guidance in his 2017 Executive Order on Religious Liberty. He directed all executive agencies to ensure that religious freedom would be protected and respected – including the Department of Defense.

But apparently, there are some “deep state” military commanders in the Pentagon who didn’t get the memo.

Or maybe these commanders are going rogue and choosing to ignore the President’s order.

Either way, the more military cases we litigate, the clearer it is to me that the military can no longer be left to its own devices when it comes to religious liberty. We’ve seen how this leads to terrible results – chaplains threatened with military imprisonment, decorated military careers on the verge of destruction, veterans being assaulted by their own military brothers, et cetera.

Simply put, military commanders need clear and direct guidance to get them in sync with the Constitution and federal law.

Right now, President Trump has an opportunity to do exactly that by issuing an executive order that specifically addresses religious liberty in the military. With a new order, the President would send a powerful message to Pentagon officials that they must be more vigilant in protecting the religious liberty of our troops. This will ensure the American service member remains the most powerful weapon in our arsenal. Military service members in America should not lose the very freedoms they risk their lives defending.

Related Story: Fighting the “Deep State” and Restoring Religious Freedom in the Military