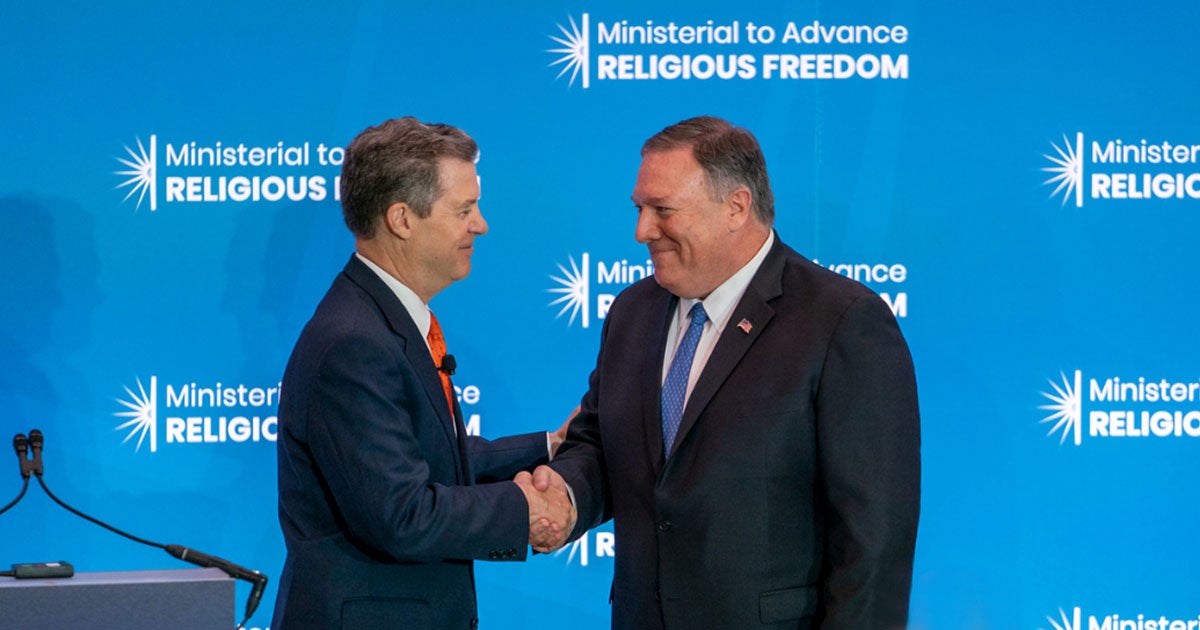 Throughout the last three years, the current president and his administration have shown an unwavering domestic commitment to protect the First Freedom of all to live consistent with their deeply-held beliefs.

For those who need a refresh of the numerous advances the administration has made for religious freedom, you can find a comprehensive list in our previously published article.

There’s plenty of evidence to show how we’re reclaiming religious freedoms here at home. At the same time, the administration has built on its momentum of domestic achievements to lead the way to protect religious freedom worldwide. In fact, just a few months ago the president spearheaded the Global Call to Protect Religious Freedom, an international event marking the first time an American president hosted a United Nations meeting on religious freedom.

And today, we’re happy to report another first.

Recently, U.S. Secretary of State Mike Pompeo announced the formation of an International Religious Freedom Alliance (IRFA), a multinational gathering of more than two dozen countries who will collaborate to pursue religious tolerance and end religious persecution. This initiative is the first of its kind, marking the first time in history an international coalition has come together at a national leadership level to push the issue of religious freedom forward around the world.

Why is this newly-formed alliance important to religious freedom?

To help answer that question, let’s take briefly take a look at how the State Department’s recent policy actions will benefit America’s unique role in the world, as well as how they will help reclaim religious liberty here at home.

Thanks to YOUR financial support, First Liberty keeps winning and reclaiming religious freedom for all people of faith in America.

Continuing to Shine as a Beacon of Hope

For over two centuries, millions of people around the globe have looked to the United States as a safe haven, especially for those who face persecution due to their religious beliefs.

Yes, our nation has historically proven to be one of the world’s leading protectors of the alienable right of all to live out their faith. But America’s longstanding reputation as a beacon of freedom isn’t merely based on being a refuge or a sanctuary where people can flee to find shelter from oppression.

What also makes America unique and exceptional is our commitment to taking our First Freedom and making it one of our nation’s greatest “exports.”

That’s why the State Department’s initiative and leadership in the creation of the IRFA is further affirmation that America continues to be a beacon of hope for the rest of the world.

And given the fact that current administration has made religious freedom one of its top domestic policy priorities, it should come as no surprise that our nation’s top leaders are taking an active role to make sure that the God-given right of religious liberty is also protected around the globe.

Secretary Pompeo stated during his formal announcement of the IRFA:

“…Protecting religious freedom is certainly not exclusively an American priority…Our mission spans nationalities, political systems, and creeds. Together, we say that freedom of religion or belief is not a Western ideal, but truly the bedrock of societies.”

Too often, we tend to think heinous religious restrictions and government crackdowns in totalitarian nations are too far away to affect our own religious freedom as Americans.

It’s no secret that religious liberty and people of faith across the globe are under heavy attack. The Pew Research Center reported that from 2007 to 2017 “government restrictions on religion—laws, policies and actions by state officials that restrict religious beliefs and practices—increased markedly around the world.” Over that time period, the data shows a 30% spike in countries worldwide with severe religious restrictions.

It’s true that in America we do not have the same scale of physical violence, unrest and restrictions as seen in very repressive nations. At least, not yet. Nonetheless, we have seen a recurrent and growing pattern of hatred and animosity directed against Americans who live out their faith, with attacks becoming more intense, brazen and frequent over the last decade.

As you can see, it’s of critical importance when the United States takes a proactive leadership role to safeguard religious freedom worldwide, including championing the IRFA. Because by doing so, we’re simultaneously ensuring that we are protecting the First Freedom of all Americans right here at home.