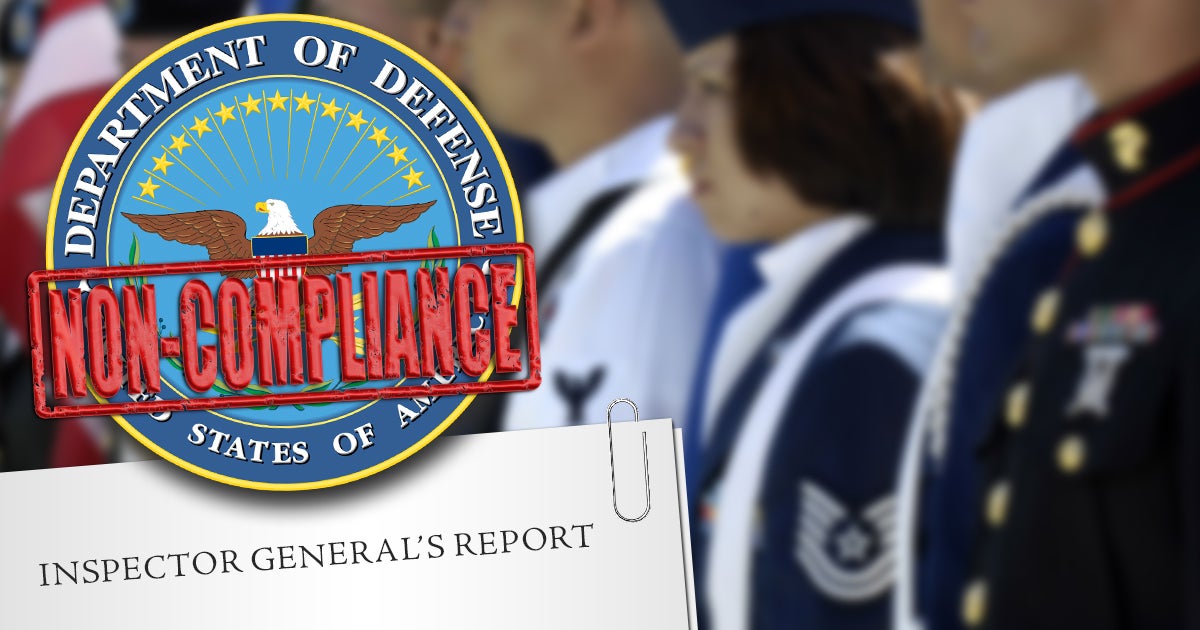 The Department of Defense (DoD) is in “potential noncompliance” with the law and military regulations for reviewing religious exemptions to the COVID-19 vaccine mandate, according to the Pentagon’s internal watchdog.

The IG’s report comes about a week after a coalition of national leaders—including 22 state attorneys general and 27 members of Congress—filed legal briefs in federal appeals court supporting U.S. Navy service members seeking legal, religious accommodations. First Liberty continues to represent and fight in court on behalf of dozens of Navy SEALs and thousands of Navy personnel in a class action lawsuit.

The memo argues that countless service members’ requests may not have been given the proper consideration required by law:

The document stated that the “volume and rate” at which the denial decisions were made “is concerning.” Based on the report’s calculations, there may have been as little as a 12-minute review of each service member’s request.

“The DOD’s own Inspector General says there’s evidence that the Pentagon is breaking the law. This report confirms what tens of thousands of service members have suspected all along; that their religious accommodations were never going to be reviewed fairly and this is just an ideological purge. Our troops deserve so much better.”

The report also mentions that the DoD could be failing to comply with the Religious Freedom Restoration Act of 1993 (RFRA), a federal law that’s protected religious freedom for nearly three decades. RFRA says the government must accommodate people’s religious practices when it can and gives citizens their day in court when they believe the government has violated their rights. The law has been a bulwark when religious Americans have had to fight in court in major First Amendment cases.

Throughout the course of First Liberty’s legal fight to restore religious liberty for military service members, RFRA has been a staple of our legal defense. Our ongoing lawsuits on behalf of U.S. Navy and Air Force service members explain that the DoD is violating RFRA by treating service members of faith more harshly and forcing them to violate their religious beliefs.

Fox News also reported this week that the Navy is in the hot seat because it “quietly rolled back an order punishing SEALs who remain unvaccinated due to their religious beliefs.”

The order, “Trident Order #12,” disqualified SEALs seeking religious exemptions from the COVID-19 vaccine from training, traveling for deployment and conducting other standard business. It was first issued in September 2021 and initially required all special warfare forces expected to comply with the vaccine mandate within a month.

The order specifically said that “Special Operations Designated Personnel (SEAL and SWCC) refusing to receive recommended vaccines based solely on personal or religious beliefs will still be medically disqualified.” This meant that SEALs were designated as “non-deployable” if they submitted religious accommodation requests.

The order was put on hold due to a preliminary injunction issued by the Fifth Circuit Court of Appeals in early 2022 as part of First Liberty’s owning lawsuit. However, the Navy quietly rolled back the order in May 2022, a few months after the injunction was issued. As Fox News reports, it is not immediately clear whether the Navy replaced the order with any other document or the reasoning behind its termination. Our legal team became aware months after the order had been rescinded.

“Now that the Navy has rescinded this unlawful order, the only reason it won’t allow our SEALs to get back to doing their jobs is because of their religious beliefs…America faces many national security threats, and the Navy is suffering a historic recruiting crisis. There’s no good reason to keep these trained and experienced warriors from serving.”

Our U.S. Navy SEAL and Air Force clients still need our ongoing support. Every one of them—and their families—are counting on us to deliver a victory. Together, we can put a stop to the spiteful actions of the Biden administration and protect thousands of service members from further injustice. Winning this case could have a major impact for religious freedom in the military. Please donate to First Liberty today.