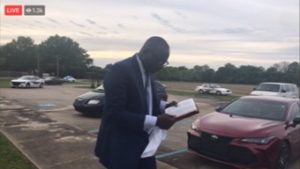 “Mayor Errick Simmons’ order singles out churches for law enforcement,” said Jeremy Dys, Special Counsel for Litigation and Communications at First Liberty.  “The Constitution did not give the Mayor a doctor’s note to do as he wishes.  Government officials cannot send in the police just because a car is parked on a church parking lot instead of a liquor store.”

“The authority of any mayor is always subject to constitutional rights,” said Matthew Martens, partner at WilmerHale. “Even in emergencies, religious liberty does not evaporate in the face of the police power of state.”

In its petition, attorneys with First Liberty explain that, “By denying Plaintiff the ability to assembly via a drive-in church service, Defendants are in violation of the Freedom of Assembly Clause. Defendants cannot meet the no-less-restrictive-alternative test. The CDC’s social distancing guidelines are appropriate to limit the spread of COVID-19. Imposing more restrictive requirements that target only churches and their drive-in services is not the least restrictive means of achieving Defendants’ public safety goal.”