68% of Americans Oppose Court-Packing; Tell Us Your Thoughts in First Liberty’s Newest Poll

In a 2019 interview with National Public Radio, the late Justice Ruth Bader Ginsburg was asked her thoughts on the possibility of packing the U.S. Supreme Court with more justices. Held in high regard by many of today’s court-packing proponents, Justice Ginsburg offered a telling response, as seen in the image below: 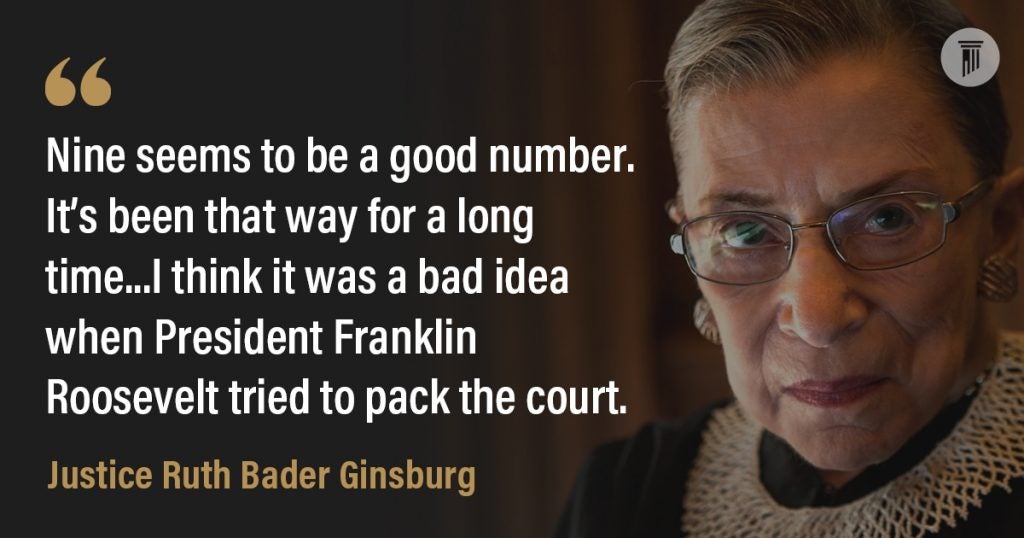 Now, as President Biden and other politicians in Washington D.C. continue to indulge their thirst for power by seeking to pack the court and undo 150 years of court history in America, it’s perhaps worth reminding them that Justice Ginsburg wasn’t alone in her opposition to this treacherous proposal.

In this special feature, we’ll break down recent Mason-Dixon polls showing that most Americans—just like Joe Biden said in 2020—are not “fans of court-packing.”

Majority of Americans Oppose a Coup of the Supreme Court

Recent Mason-Dixon polls reported that a vast majority of Americans aren’t on board with the current attempt to overthrow the nation’s highest court. In fact, more than two-thirds (2/3) said they are opposed to adding more justices on the Supreme Court: 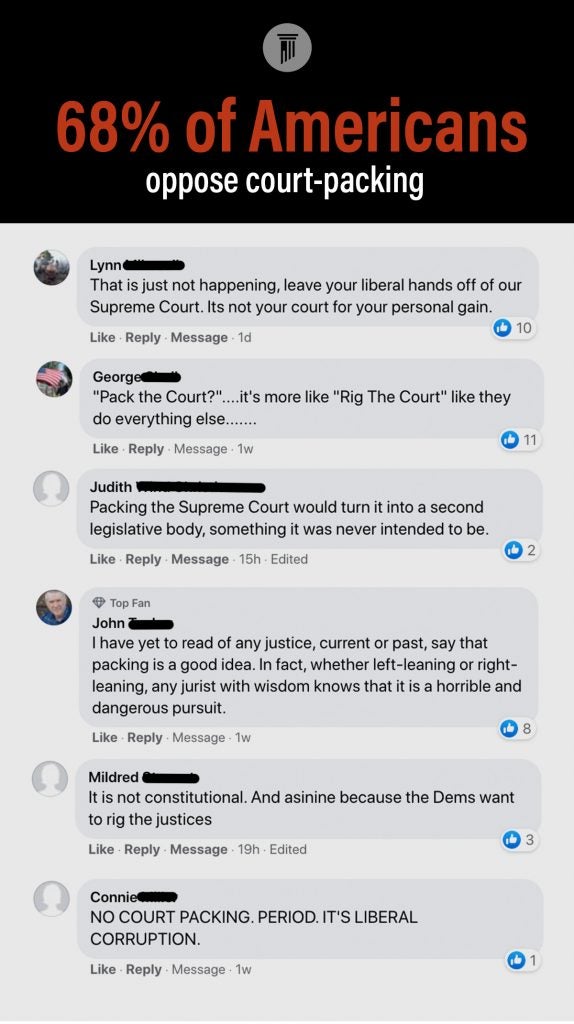 When President Franklin Roosevelt attempted to pack the Supreme Court during the New Deal era, his scheme outraged the public and the Republican Party. It was also met with much opposition within his own Democratic Party. In a passionate speech, U.S. House Judiciary Committee Chair, Hatton W. Sumners, a Democrat from Texas, warned that court-packing could lead to dictatorship. Even FDR’s Vice-President, John Garner, opposed the court-packing plan.

Here’s how Americans responded when asked specifically whether President Biden should or should not pursue a plan to increase the number of Supreme Court Justices:

Even more revealing is that Democratic political elites in the U.S. House and Senate are seeking to ram court-packing through even though a majority of everyday Americans in the Democratic Party do NOT support the radical overthrow of the country’s highest court. In fact, less than half—only forty-five percent (45%)—of Democrats said President Biden should increase the number of Supreme Court justices.

Most Americans See Court-Packing for What It Is: A Brazen Power-Grab

One of the greatest dangers of court-packing is that it will destroy the independence and legitimacy of the Supreme Court, and the federal courts as well. It would essentially turn the judiciary into a never-ending political circus, where both parties would add judges at will in order to push through their agenda—or use the court to exert revenge or punishment on the opposing party.

Mason Dixon’s polling reveals that Americans are by no means blind to the political power-grab that court-packing really is: 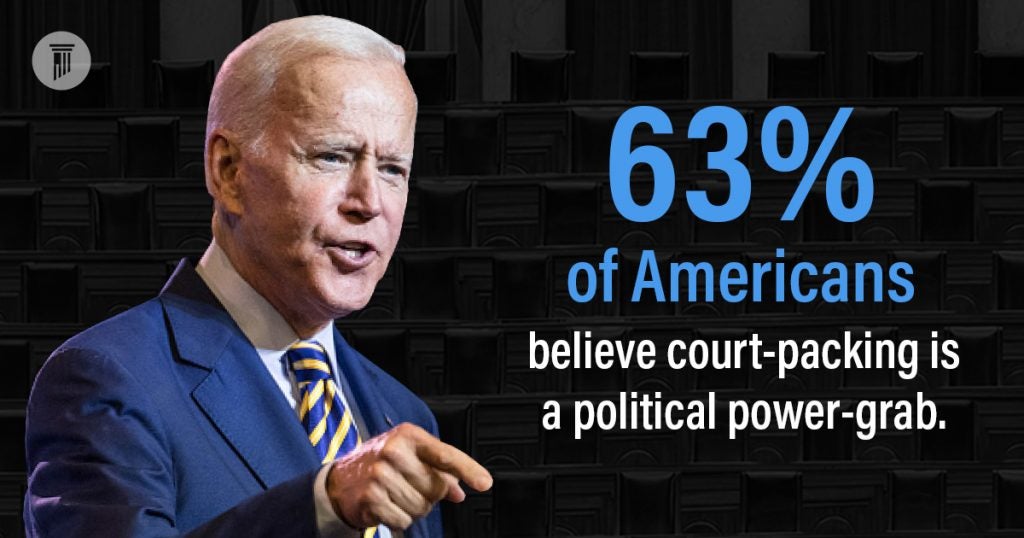 There are many destructive consequences if court-packing were to succeed, as First Liberty’s experts have discussed at length in previous articles. But likely the most severe of all is the threat that this plan poses to our constitutional rights and freedoms.

The failures of court-packing were more than evident in Venezuela and Argentina. It only took about a decade or so after their respective presidents packed their Supreme Courts for these nations to plunge into a downward spiral—one that eventually led to dictatorial rule and the erosion of fundamental civil liberties, including religious freedom.

The good news is that most Americans today aren’t being fooled by radical elites who try to water down the Supreme Court overthrow by calling it court “reform.” 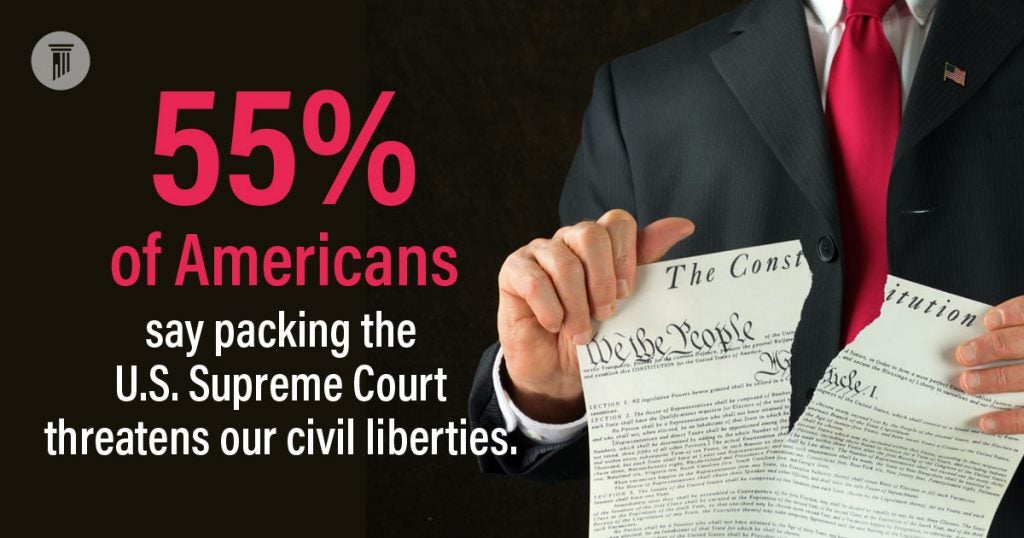 Your Thoughts on Court-Packing

With the stakes for protecting our freedoms—including religious liberty—at an all-time high, it’s crucial that all Americans are educated and help expose the radical plan to destroy our nation’s court system.

Take a couple of minutes to complete the survey below and tell us what you think about the plot to overthrow America’s judiciary: