First Liberty gives you the First Word on religious liberty stories from around the country. 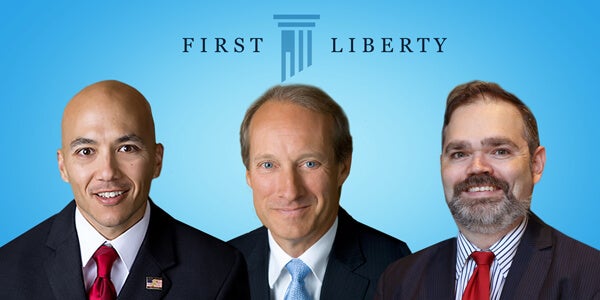 Thanks to the U.S. Department of Labor’s (DOL) Office of Federal Contract Compliance Programs, the federal government clarified that it is free to work with whichever organization is best able to achieve the government’s goals, providing optimal services to those in need.

The guidelines, recently issued by the DOL, explain that under current law the federal government may not discriminate against religious contractors or subcontractors. Instead, all contractors, religious and non-religious, must be permitted to compete for federal contracts on an equal playing field.

Obamacare — also known as the Patient Protection and Affordable Care Act — forced many Americans, from nuns to your neighbors, to choose between their faith or having health insurance coverage.

But the conflict didn’t end four years ago when the U.S. Supreme Court upheld the religious liberty of conscience-bound employers by concluding, in Hobby Lobby v. Burwell, that some businesses could opt out of purchasing policies containing Obamacare’s contraception mandate.

While many employers have successfully claimed certain protections from the Obamacare contraception mandate, these protections do not typically extend to individuals and families buying coverage from the individual markets.

Under the Obamacare contraception mandate, insurance plans offered in Obamacare marketplaces must cover all FDA-approved forms of birth control. Though employers may opt out of purchasing such coverage in limited circumstances, there has been no mechanism for individual consumers of the state markets to avoid purchasing plans that cover contraception.

These requirements force pro-life Catholics and others who morally oppose birth control to choose between purchasing coverage that violates their deeply held convictions or going without health insurance.

Originally published by the Institute for Justice on August 21, 2018.

On behalf of three Maine families, the Institute for Justice (IJ) and the First Liberty Institute (FLI) have filed a legal challenge to Maine’s exclusion of religious options from the state’s school choice program. IJ represents families from three small “tuitioning towns” in Maine—Orrington, Glenburn, and Palermo—towns where the local school district offers high school tuition payments for students to attend the public or private secondary schools of their choice in lieu of maintaining public schools of their own. However, a state law prohibits those towns from paying tuition on behalf of families who choose otherwise qualified religious schools.

Maine’s law blatantly discriminates against parents based on religion, providing some families with tuition support for the school of their choice but denying that same support to other families. The families who filed the lawsuit qualify for Maine’s tuitioning program in all other respects, but they are excluded from participating only because they chose religious schools for their children. Such discrimination is both unfair and unconstitutional.

Learn more about this case

President Trump promised the American people that he would nominate constitutional conservatives to the federal bench. He has delivered on that promise in spades. But establishment politicians are pushing President Trump to nominate Judge Sul Ozerden to the U.S. Court of Appeals for the Fifth Circuit.

That would be a big mistake.

Ozerden is not a conservative trial judge. His judicial philosophy departs from the legacy of the late Justice Antonin Scalia and is unlike that of Justice Neil Gorsuch and Brett Kavanaugh, not to mention the two dozen federal appellate judges and dozens more federal trial court nominees President Trump nominated.

Not all Republicans are constitutional conservatives.

An Army chaplain and his assistant may be disciplined for following his denomination’s rules while accommodating a same-sex couple.

In my 16 years in the U.S. Marine Corps, both on active duty and now in the reserve, I have had the privilege of serving with many fine officers. I know firsthand that the difference between life and death is often a matter of leadership. Whether in combat or in training, strong and decisive leadership inspires confidence, improves morale, and contributes to the ethos of professionalism that has made the U.S. military the finest fighting force in the world.

As director of military affairs for a religious-liberty law firm, I have recently observed a disturbing trend that, if left unchecked, threatens to weaken our military from within. What began as passive-aggressive political correctness has devolved into open hostility to religious liberty in the military. Recent disturbing events within the U.S. Army are a perfect example of both.