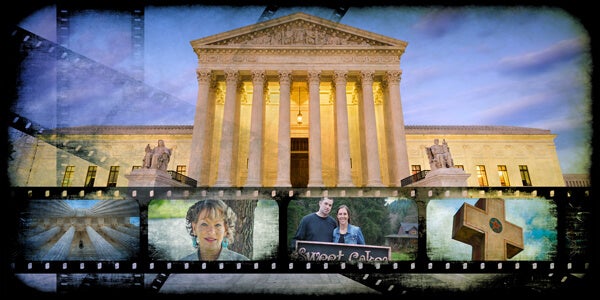 And as teams watch game tapes and get ready to go head-to-head with their rivals, here at First Liberty, we’ve been preparing for our upcoming season by doing some film review of our own.

With the start of the Supreme Court’s term only a couple of months away, we’ve been preparing throughout the summer as we appeal and litigate a number of cases before the nation’s highest court.

But this isn’t the first time we’ve made it to the “end zone.” Over the years, we’ve taken part in a multitude of cases at the highest federal level, including several important landmark cases brought before the U.S. Supreme Court.

And through it all, we’ve maintained an unprecedented winning record. 9 out of 10, in fact. That’s right. We continue to win 90% of the legal matters we handle, which means that Americans can count on our champion legal team to deliver them a victory.

In this edition, we take a look at 3 key Supreme Court cases in our history and how we continue to be first in the fight at America’s highest court.

First in our highlight reel is the case of Mary Anne Sause, the Kansas nurse who was ordered by two police officers to stop praying in her own living room.

We appealed this case to the U.S. Supreme Court, as we sought to protect the religious liberties of Mary Anne — and of all Americans — in one of the most sacred and protected places in legal doctrine: the home.

In the end, we won at the nation’s highest court. In its ruling, the Justices of the U.S. Supreme Court unanimously stated, “There can be no doubt that the First Amendment protects the right to pray. Prayer unquestionably constitutes the ‘exercise’ of religion.” In essence, the Court recognized that no American should ever be told that they cannot pray in their own home.

At the same time, however, other Americans continue to fight for their constitutional right to pray. High school football coach Joe Kennedy was fired from his job because he took a knee in a silent 15-second prayer after each game. Now, his case is pending at the U.S. Supreme Court, as First Liberty fights for his rights – and the right of every American — to engage in private religious expression without the fear of getting fired.

Highlight #2: Affirming Americans’ right to live according to their religious beliefs

The Constitution protects your right to believe, express, and live according to your religious convictions. What’s more, the First Amendment was designed not just to protect popular views, but also to safeguard minority viewpoints. And today, that protection is particularly meaningful for Americans with deeply-held religious beliefs on the issue of marriage.

In the landmark U.S. Supreme Court case Masterpiece Cakeshop v. Colorado Civil Rights Commission, First Liberty Institute filed a brief supporting Jack Phillips, the Colorado baker who was charged with discrimination when he declined to create a custom cake for a same-sex wedding. In our brief, we argued that freedom of expression for ourselves should require freedom of expression for others.

And America’s highest court heard what we had to say. In its decision, the U.S. Supreme Court echoed the concerns expressed through our arguments, stating, “The Constitution commits government itself to religious tolerance…all officials must pause to remember their own high duty to the Constitution and to the rights it secures.”

Although we look back on the Masterpiece decision and recognize it as a victory for religious freedom, people of faith across America – like Aaron and Melissa Klein — are still fighting to vindicate their rights. Our attorneys are fighting to ensure the government cannot overreach and abuse its power, compelling the Klein’s to violate their conscience and beliefs to create a cake for a same-sex marriage. Freedom of expression is a right that should be guaranteed for all.

Because we forget what we do not see, veterans memorials are built as living reminders of our country’s history and the cost of war. To honor the sacrifice of our fallen heroes, First Liberty Institute stepped in to stop the destruction of the Mojave Desert Veterans Memorial. We filed a key amicus brief at the U.S. Supreme Court on behalf of The American Legion, the Veterans of Foreign Wars, the Military Order of the Purple Heart, and the American Ex-Prisoners of War.

In its final 5-4 decision, the U.S. Supreme Court cited First Liberty’s brief a record 12 times, saving the Mojave Memorial from destruction and setting a precedent for defending other memorials with religious imagery.

That victory means all the more today, as we’ve petitioned the U.S. Supreme Court to prevent the disfiguration – or outright demolition – of the Bladensburg WWI Veterans Memorial. Seeking only to commemorate the fallen, Gold Star Mothers and American Legion erected this memorial in remembrance of their lost sons and husbands. Our opponents want to erase the memory of the service and sacrifice of 49 fallen servicemen, but since the dead cannot speak for themselves, First Liberty is carrying on the battle to forever etch in history our gratitude for their service.

See a full list of our victories and highlights before the U.S. Supreme Court!