Kicking Off Back-to-School Season With a Big Win For Kountze Cheerleaders (Again!) 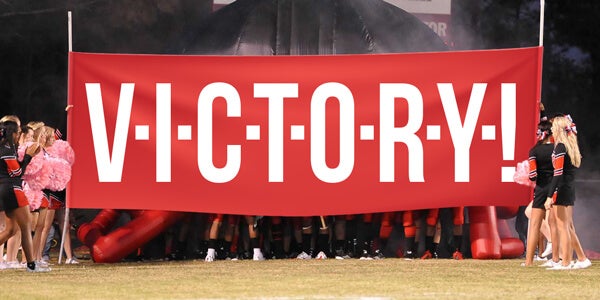 With school back in session and fall football already under way, what better way to kick things off than with a big WIN!

And that’s exactly how First Liberty got the fall season started.

Last week, we secured a resounding victory for the Kountze, TX cheerleaders, reaffirming their constitutional right to display religious messages on their run-through banners.

The Texas Supreme Court denied the most recent appeal filed by the Kountze Independent School District, essentially ending a 5 year legal battle in which the school district opted for scorched-earth litigation tactics, dragging the cheerleaders to court time and time again in an attempt to censor their banners.

The court’s decision not to hear the case gives the final word on this issue and sets a precedent that no school district should be able to censor, ban, or claim ownership of the private religious speech of its students.

Of course, we should highlight that this isn’t first time we’ve won against the Kountze ISD in court. In fact, it’s the second time in this case that we’ve won at the Texas Supreme Court.

Has your religious speech been silenced on campus?

But although we succeeded in stopping the Kountze ISD’s bullying tactics, extremists and secularists continue to defy longstanding legal precedent protecting the rights of students, as they harass and intimidate students to keep their religious beliefs tucked away from public view.

In school districts across America, students are hesitant to practice or express their religious beliefs in school because they’ve been misinformed about their constitutional rights.

What’s more, radical groups and misguided school district officials have spread the idea that religious expression has no place in our nation’s schools, and that students have to check their religious liberties when they enter the schoolhouse gates.

Today, Americans simply cannot afford to go back to school unprepared. Our former client, Toni Richardson, knows how important it is to know your rights in case you are blindsided by a religious liberty attack from school officials.

Like Toni, many of our clients have to endure through the headache of litigation brought on by misguided government officials.

Consider, for example, Moriah Bridges and Brooks Hamby, two high school students who were ordered by school officials to omit religious references from their graduation speeches – if they refused, they likely wouldn’t have been able to deliver their speeches at all!

How many more graduations have to be ruined before school officials learn that the First Amendment protects student remarks at graduation? The last lesson that school districts need to teach is that students should hide their religious beliefs from public view. That fails the test of the First Amendment.

For that reason, First Liberty is ready to protect future students who wish to reference their religious beliefs in a personal speech to their classmates.