Lasting Peace for the Bladensburg Memorial? 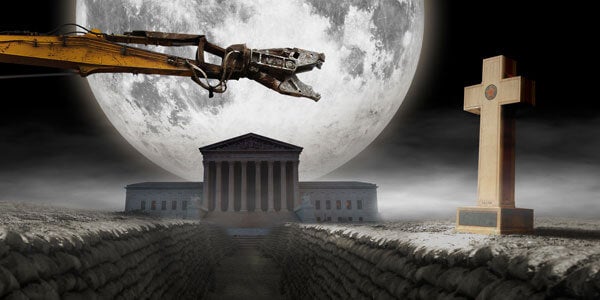 The ol’ saying goes, “it all comes down to this.”

But in the enduring fight to save the Bladensburg WWI Veterans Memorial – our stance in this upcoming winner-take-all SCOTUS battle is this: it’s not coming down.

Years and years of intense legal battles to stop the destruction of the Bladensburg Memorial will culminate when our attorneys argue before the 9 Justices of the U.S. Supreme Court in just a few short months.

For quite some time, we’ve been sharing with you the vital importance of this case. But now it is certain that the highest court will hear our argument, and that’s why we must emphasize and assure you that the stakes of this case are, indeed, monumental.

For one, the Supreme Court’s ruling on Bladensburg could determine the fate of hundreds of veterans memorials across the country.

If you drive a few miles down from Bladensburg, you can walk through Arlington National Cemetery, where our nation’s best are buried. Here, you will find the Argonne Cross that stands in honor of American military service members who – like the Boys of Bladensburg – gave their lives in France during World War I.

Amid the rolling terrain of this historic, hallowed ground, you will also find the Canadian Cross of Sacrifice, which honors American soldiers who fought and died in the war alongside their Canadian comrades.

And while many will see these memorials and gravestones as just concrete and stone, we know they represent much more than that.

When you gaze at memorials like the Bladensburg Memorial, you ought to see flesh and blood.

Specifically, you see the flesh and blood of those fallen heroes – generations of America’s youth cut down in their prime – who sacrificed the comfort of home; men who left behind wives, children, mothers, brothers, and sisters – and who sailed off to fight in one of the toughest and most gruesome wars we’ve seen in history.

Behind these memorials are real people, real Americans who accepted the great responsibility of serving their country and defending freedom. These are gravestones that keep alive the memory of young soldiers like Essell Maxwell, who demonstrated utmost courage when he attacked the crew of a heavy machine gun with only a corporal to aid him. Essell boldly thrust himself into the heart of the battle and ultimately gave his life in service to his country.

These memorials stand in honor of men like Henry Hulbert, a gallant, decorated soldier who – despite having been previously wounded on numerous occasions – led his unit from the front and was ultimately struck down by an unknown German machine-gunner.

Read the stories of the Boys of Bladensburg.

But beyond protecting the memory of those fallen heroes, the Supreme Court’s ruling on the Bladensburg case will have a profound impact on how we are able to commemorate all of America’s service members and veterans – those in the past, those presently serving, and those who will serve in the future.

That’s why winning at the Supreme Court and stopping the demolition of the Bladensburg WWI Veterans Memorial is only one part of this battle.

Keeping the bulldozer away from the Bladensburg Memorial would be a victory, but there is much more on the line. With this case, there is an opportunity to set a legal precedent that changes how the courts interpret and evaluate the law in regards to memorials and monuments with religious imagery.

In other words, we have the unique chance to set precedent for decades to come and to reverse years of bad judicial doctrine that threatened to destroy any kind of religious expression or symbol found on public property.

A victory on the Bladensburg WWI Veterans Memorial case could indeed move the body of American law toward a more complete protection of veterans memorials.

Again, the battle for Bladensburg is not just about keeping stone and concrete untouched, but about ensuring that our service members and fallen heroes – who shed blood and put their lives on the line – are remembered well.

Stand strong with First Liberty to save the Bladensburg WWI Veterans Memorial.