A Two-Front Fight: What the Power Split in Congress Means for Your Freedom 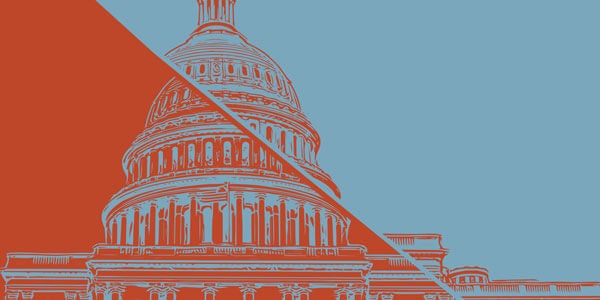 By now, you probably have a good sense of the election results. But what you may not hear from the mainstream media – and what we will tell you – is that those results are going to have a deeper impact than you initially thought.

And so, to keep you in the loop of what’s going down in Washington, First Liberty is giving you the things you need to keep on your radar when the new Congress takes over in 2019.

If there’s one key election takeaway that stands above the rest, it’s this: the 2018 midterms left America with a divided Congress; the Senate in the hands of the Republicans and the House of Representatives soon to be controlled by the Democrats.

Let’s take a deeper look at what this two-chamber split will mean for your first and most foundational freedom – and how it will affect how you live out your faith.

At first glance you may think that each house being controlled by a different party will just mean more swamp gridlock. But, ironically, the power split could actually turn out to be a positive sign for people of faith.

Why? Because by now, you and millions of Americans know that President Trump has prioritized the nomination of originalist judges to America’s federal courts, and Senate Republicans have complemented his efforts by confirming record numbers of those judges.

Simply put, Senate Republicans – who now have a slightly larger 53-seat majority – are likely to hone their efforts at what they’ve done so successfully in the last 2 years, and that is: confirming Trump’s excellent nominees to the federal courts.

Come 2019, you should expect to see a lot of movement on the nomination front – and that bodes well for people of faith, as many of the President’s nominees so far have proven records defending religious liberty.

Help us get more conservative judges confirmed who will protect religious freedom as written in the Constitution.

A Fight to Keep Religious Freedom as the First Freedom

While things may look promising on the Senate side, there’s a slightly different story developing over on the House of Representatives. As you read this, the temperature’s been rising for quite some time on an issue of critical importance – and it’s a battle that you may not have heard about, but one that will likely be fought sometime in 2019.

Right now, a growing majority of House Democrats have signed their names in support of H.R. 3222, a bill that directly targets the very heart of the Religious Freedom Restoration Act (RFRA).

They claim – along with other RFRA opponents – that they’re just trying to “amend” the law or update the language in a few places. But the changes that Democrats are proposing to the longstanding RFRA language could actually make RFRA’s religious freedom safeguards inferior to other items in their political agenda, including protections for sexual orientation, gender identity and abortion.

But let’s take a step back for a second. Do you know why RFRA is so important to you and your faith?

Well, it’s because RFRA has been the law of the land for 25 years, and it has served as a bulwark to protect you from the government and state officials that want to burden or stop you from freely living out your faith.

Consider, for example, the U.S. Supreme Court case, Burwell v. Hobby Lobby (2014), which we see today as a landmark religious freedom victory. In that case, the Court ruled that the HHS Obamacare contraceptive mandate – which forced thousands of faith-based business owners to violate their religious beliefs – violated RFRA.

What’s more, 21 states have their own versions of RFRA laws, which provide an additional layer of religious liberty protections for you, your neighbors and other Americans in their home states.

To sum it all up, if House Democrats do gut RFRA, they would essentially succeed in relegating religious freedom to a “second-class” liberty.

And that’s why the fight to keep RFRA intact is so critical, because that law plays a key role in keeping religious freedom as your first freedom. 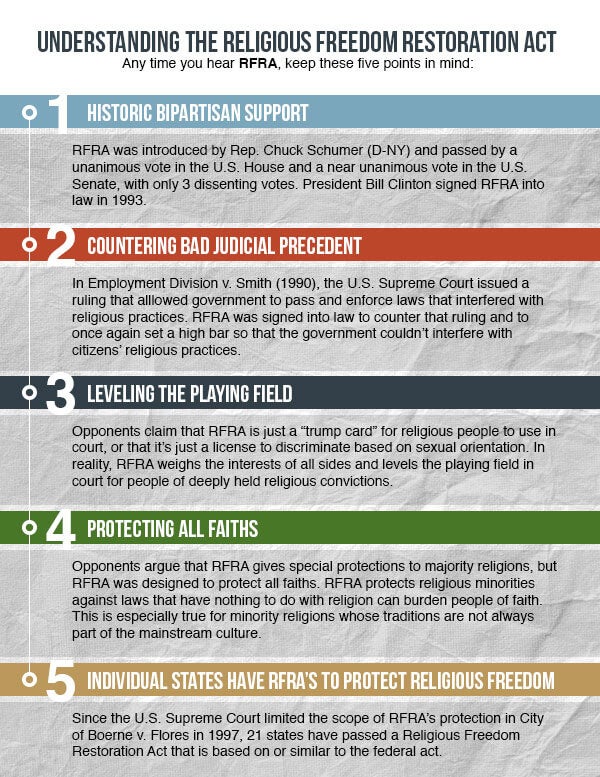