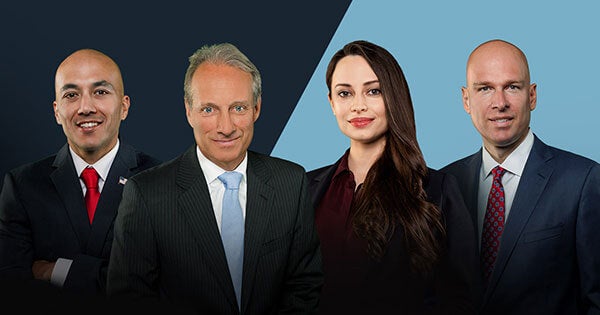 Today, on the eve of the final battle for Bladensburg, we want to share with you how First Liberty’s elite legal team is leading the national conversation in what could be the most important case of this Supreme Court term.

In this edition, we’ve gathered a series of media highlights just for you – showcasing the voices and expertise of several First Liberty attorneys as they explain the facts and the law with you and millions of Americans.

As we prepare for oral argument, we want to make sure you have an easy and accessible way to brush up on your constitutional history – and there’s no better way to do it than to hear first-hand from our expert team of lawyers who are first in the fight for your religious liberty!

Want to be the FIRST to know the latest on Bladensburg?

Peter Jackson’s documentary “They Shall Not Grow Old” brings to life the men who actually fought in World War I. The silent, grainy, gray films from a century ago have long felt too remote and distant to convey the power, intensity and suffering that the war entailed. But Jackson changed all that. He added color, adjusted the film’s speed, and even hired actors to voice the dialog of the men as revealed by forensic lip readers.

Alvergia Guyton and Mary Laquay may not be Peter Jackson, but they have done the country a similar service in bringing to life their uncles of the same era.

John Henry Seaburn Jr., Alvergia’s uncle, fought in a segregated African-American regiment of the U.S. Army that was placed under French command – the famed “Red Hand Division.” He died of wounds received in combat.

Mary’s uncle, Thomas Fenwick, descended from a Revolutionary War patriot. Thomas died of pneumonia after being gassed in battle days before the war’s end in 1918.

These men are long dead, having sacrificed their all for the cause of freedom. If their mothers and The American Legion had not determined to build a visual reminder of their service and sacrifice, John Henry and Thomas would be more silent and forgotten than the black and white film strips recently restored by Peter Jackson.

Legal experts John Yoo and James Phillips have recently argued that 2019 could be a historic year of precedent-setting Supreme Court cases because this is the first time since 1936 that the Court has had a consistent conservative majority. This Court could return us to an era of judicial restraint where the majority of the Justices affirm that it is not their place to create or change the law, only to fairly enforce the law that already exists.

Although Yoo and Phillips discuss the implications of this development for administrative agencies and the separation of powers, there is one more area of law that could be dramatically affected by this year’s Court: the Constitution’s religion clauses. In particular, this Court could bring clarity to the establishment clause case law.

As many gathered around a Christmas tree last week, attorneys representing thousands of Americans were busy putting the finishing touches on friend-of-the-court briefs in support of the Bladensburg World War I Veterans Memorial.

The “Peace Cross,” as local residents call it, is a simple cross-shaped memorial of concrete and bronze, sitting in the median of a highway in Bladensburg, Md. In 1919, mothers who lost their sons in World War I designed the memorial, which The American Legion then built, dedicating it in 1925. The mothers of 49 men from Prince George’s County chose the shape of a cross as the memorial, recalling the gravestones erected over their sons on European battlefields.

But after nearly 100 years, that memorial to heroes of the Great War is threatened: A three-judge panel of the U.S. Court of Appeals for the Fourth Circuit declared last year in a 2 to 1 decision that it is an unconstitutional endorsement of religion. If their decision stands, the Peace Cross likely will have to fall.

Fortunately, the Supreme Court has agreed to hear the appeal made by The American Legion, whom we at First Liberty Institute, along with Jones Day, represent. We argue that this veterans memorial is not only constitutional, but that the primary test the court devised in 1971 to evaluate veterans memorials like it is no longer viable.

In 1919, Mothers Designed a Cross to Remember 49 Veterans. Now the Supreme Court Will Decide If It’s Constitutional.

They came from many walks of life, the 49 boys of Prince George’s County, Maryland.

Several were laborers like George Washington Farmer and William Lee–one white, the other African-American. One, Ernest Pendleton Magruder, was a well-known surgeon. Another, Henry Lewis Hulbert, a Medal of Honor recipient of a previous war, would again display such bravery that he would earn a Distinguished Service Cross.

Educated or not, white or black, rich or poor, their diverse backgrounds mattered little as they died on foreign soil in the final months of the “war to end all wars.” Their bodies were interred under small grave makers, including crosses, in cemeteries far too distant for their families to ever visit.

So, in 1925, a local post of The American Legion—now the largest veterans service organization in the country with approximately 2.2 million members—erected the Bladensburg World War I Veterans Memorial to honor the 49 Bladensburg-area men who gave their lives serving in the U.S. Armed Forces during WWI.

But the cross-shape of the monument is too much to bear for some humanists, who have sued to have the memorial deemed unconstitutional.

Share this article with your friends and family on social media today!