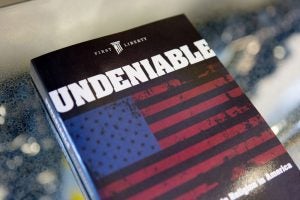 Plano, Texas—This week, First Liberty Institute announced the release of Undeniable: The Survey of Hostility to Religion in America (2017 Edition). Including over 1,400 cases of domestic attacks on religious liberty, Undeniable documents an unprecedented 133 percent increase in American religious hostility over the past five years.

“The American people deserve the truth,” said Kelly Shackelford, President and CEO of First Liberty. “The battle for religious freedom can be won in courts of law, but only when we acknowledge the problem and educate ordinary Americans about their religious freedoms.”

The cases profiled in Undeniable range from a small Orthodox Jewish synagogue prohibited from meeting in a rabbi’s home to a young Catholic immigrant fired from a health care clinic for refusing to promote contraceptives, which would be a violation of her faith.

To download a free copy of Undeniable, visit FirstLiberty.org/Undeniable.