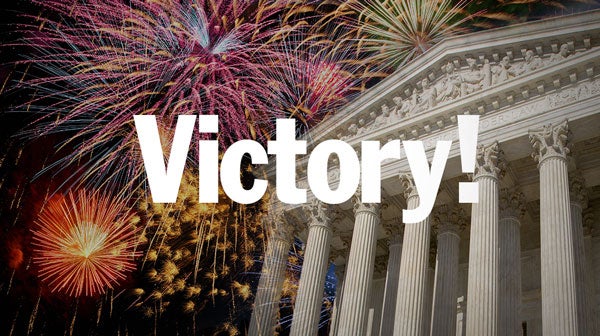 After a week of big religious freedom victories, First Liberty looks at the months ahead and how our legal team will be hard at work to continue preserving and restoring our most fundamental freedom.

Let’s start by taking a quick glimpse and review some of the key victories that were delivered last week.

First, the Supreme Court of the United States issued a decision in our case of Mary Anne Sause, a retired Catholic nurse, effectively protecting her right to pray in the privacy of her own home. Back in 2013, two police officers demanded entry into Mary Anne’s home in Louisburg, Kansas to investigate an alleged minor noise complaint. Although she politely complied with their requests, the police officers harassed and intimidated Mary Anne in the process and ordered her to stop praying…in her very own living room.

Fortunately, the Supreme Court’s decision overturned a lower circuit court ruling, defending Mary Anne’s First Amendment right – and that of every American – to pray in one of the most sacred spaces – the home.

Then came the announcement of the victory in the California case, National Institute of Life Advocates (NIFLA) v. Becerra. In a 5-4 decision, the U.S. Supreme Court ruled against a California state law which forced pro-life crisis pregnancy centers to advertise information about state-funded abortions – a message that goes against their religious beliefs. The Supreme Court’s ruling echoed the free speech arguments set forth in First Liberty’s amicus (friend-of-the-court) brief filed on behalf of 23 law professors and legal scholars from across the country.

And lastly, the U.S. Supreme Court upheld a decision from a federal appeals court in the case of Bormuth v. County of Jackson, affirming that Michigan legislators have the constitutional right to open their legislative meetings with a prayer.

What lies on the road ahead?

At this very moment, First Liberty has several critical cases that are before the justices of the U.S. Supreme Court, as well as a number of important cases pending throughout the country. Here is a glimpse at three crucial battlefronts:

1. Religious Discrimination in Employment: Recently, we filed a petition to the U.S. Supreme Court on behalf of high school football coach Joe Kennedy, who was fired for taking a knee in a brief, silent prayer after football games. We allege that the Bremerton School District discriminated against him three times: first, by banning his prayer; second, by suspending him; and finally, retaliating against him by recommending he not be rehired. Banning all coaches from praying just because they can be seen contradicts the Constitution. This explicit discrimination by the school district is illegal. Protecting Coach Kennedy’s right to private prayer will protect the religious liberty of all Americans who work for public organizations.

2. Veterans Memorials Under Attack: On the last week of the U.S. Supreme Court’s term, First Liberty also filed a petition to stop humanist radicals from desecrating (even bulldozing!) the Bladensburg WWI Veterans Memorial. This nearly century-old memorial stands as a symbol of sacrifice made by 49 fallen heroes from Prince George’s County, MD. Wives, mothers, and returning veterans of The American Legion built this memorial to stand as a gravestone for these heroes of WWI. We’re determined to keep the Bladensburg Memorial standing, because if it falls, it is only a matter of time before the wrecking ball turns to other similar memorials, including those in Arlington National Cemetery.

3. Religious Minority Groups Under Attack: First Liberty is increasingly stepping in to defend religious minorities, such as the Chabad of Irvine in Southern California, Congregation Toras Chaim in Dallas, TX, and, most recently, in Airmont, New York – a village with a marked history of anti-Semitism. Our client, Rabbi Moishe Berger, has spent nearly three years and over $20,000 trying to comply with the city’s demands—just so he can use his house for a prayer meeting!

Each of these cases could change the future of religious liberty – the liberty we must fight to preserve on behalf of every generation to come. In the past week, we have seen multiple victories for religious liberty in America, but these individual achievements have only prepared the field for greater battles in the near future.

With all of the key religious freedom battles looming on the horizon, there’s never been a better time for you to support religious liberty. With your help, First Liberty’s team of attorneys and legal experts will continue to be first in the fight for the religious freedom of all Americans.

Your gift to First Liberty Institute has a multiplied impact because of our proven legal strategy and our unique model of representation. Our attorneys win 9 out of every 10 legal matters, which means that your gift goes directly into winning some the most critical courtroom battles to uphold our First Amendment freedoms.