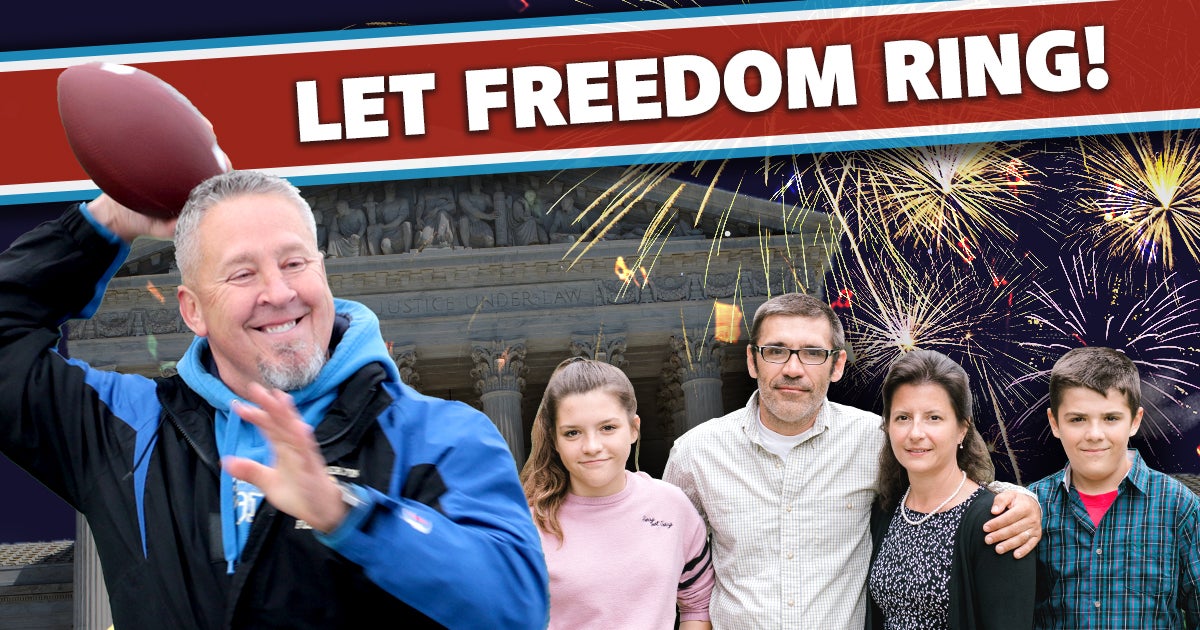 July 4th marks a day to celebrate American independence––a day of freedom and liberty. And halfway through 2022, there is indeed much liberty to celebrate.

First Liberty recently won two major cases at the U.S. Supreme Court, one on behalf of Coach Joe Kennedy and the other for families in Maine in our Treat Children Fairly case. That’s two wins at the nation’s highest court in a single week’s time! In fact, First Liberty fought two of the four religious liberty cases at the Supreme Court this term—and we won both!

In addition to these victories, our legal team secured several wins in the past six months to restore and protect religious liberty across the nation. Thanks to these triumphs, you and millions of Americans are living in liberty.

(1) Coach Kennedy Scores a Win at the Supreme Court

The U.S. Supreme Court ruled in favor of our client Coach Joe Kennedy. It upheld the right of the former high school football coach to take a knee in quiet prayer after games even if he can be seen by students and the general public. With this win, he can finally return to the place he belongs, coaching on the field and quietly praying by himself after the game. This ruling set a key precedent for religious freedom in America. It affirms the constitutional rights of all public-school teachers and coaches to engage in a brief, personal prayer in public.

The U.S. Supreme Court ruled in favor of students’ rights in our Treat Children Fairly case, Carson v. Makin, which we brought together with the Institute for Justice. Maine passed a law that banned families from using tuition assistance to send their children to religious schools. The Supreme Court held that this exclusion is unconstitutional. It affirmed that states cannot discriminate in student-aid programs against parents who want to send their children to religious schools.

(3) Supreme Court Takes a Jab at the Vaccine Mandate

In January, the U.S. Supreme Court blocked the Biden administration’s vaccine mandate on companies with more than 100 employees. This illegal expansion of government power threatened the freedoms of religious organizations and people of faith in the workplace. The ruling brought huge relief to First Liberty’s clients—Daystar Television Network, Answers in Genesis and American Family Association—three religious employers that challenged the mandate in consolidated cases.

We secured two important victories in federal court for our Navy SEAL clients. First, a district court judge ordered that the DoD cannot punish our Navy SEAL clients under the DoD’s vaccine mandate while the case progresses. Second, the court also expanded the lawsuit to a class action, which gave protection to thousands of Navy personnel who object on religious grounds to the vaccine mandate. While we are thankful for these victories, the fight for the Navy SEALs is far from over. We still are in an intense battle for their rights.

(5) Light of the World Allowed to Shine

First Liberty secured an important victory for Pastor Paul Malcolmson and his congregation, Light of the World Gospel Ministries. We reached a favorable settlement that will allow the church to build a multi-use facility in Walthill, Nebraska for worship, ministry and commercial businesses. We represented the church in a lawsuit against the local officials for denials of building and use permits. With the freedom to build new facilities, the church can also help revitalize and transform dilapidated and undeveloped property into a new space to serve all village residents.

The radical Military Religious Freedom Foundation (MRFF) sued to remove a donated Bible displayed on a POW/MIA Remembrance Table at the VA Medical Center in Manchester, New Hampshire. In March, a federal court dismissed a lawsuit filed by the MRFF, allowing the Bible to stay. This is a win for our clients, the Northeast POW/MIA Network, a private organization of veterans and patriots that owns and maintains the display.

(7) A Real Victory for a Boston Hispanic Church

Vida Real Church, located just outside Boston, applied to open a religious school. But school district officials voiced opposition to the church’s religious beliefs and put up obstacles to stop the school from opening. First Liberty stepped in and told the school district these actions were illegal and discriminatory. After we intervened, the committee approved the application—which means the church will be able to open the school.

(8) A Supreme Victory in Louisiana

A Baton Rouge pastor faced criminal charges for holding religious services during the COVID-19 lockdown. First Liberty filed an amicus brief supporting the pastor as he fought his case. We reminded Louisiana’s highest court what the U.S. Supreme Court already said: “Even in a pandemic, the Constitution cannot be put away or forgotten.” The Louisiana Supreme Court ruled in his favor and dismissed the charges.

Thank you for supporting First Liberty. These victories show that when we fight together…we can win together.

Even with these crucial wins in hand, our work to defend and protect religious freedom is far from over. As you can imagine, winning these battles has been costly. And now, we must replenish our resources for the battles ahead.

We’re still fighting multiple, high-stakes cases, and we need your ongoing support to win them, along with a number of other big cases:

Please join the fight with your very best gift today. Right now, the opportunities to impact religious liberty in America are unlike anything we’ve seen. Together we have a chance to make history—and we’re inviting YOU to be a part of it.

Will you join the fight?